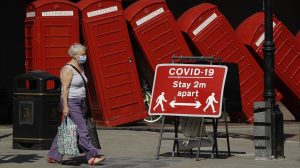 FILE – In this file photo dated Monday, June 22, 2020, a sign requesting people stay two metres apart to try to reduce the spread of COVID-19 is displayed in front of “Out of Order” a 1989 red phone box sculpture by British artist David Mach, in London. The British government insists that science is guiding its decisions as the country navigates its way through the coronavirus pandemic. But a self-appointed group of independent experts led by a former government chief adviser says it sees little evidence-based about Britain’s response. Unlike other countries, the scientific opposition to Britain’s approach is remarkably organized. The independent group sits almost in parallel to the government’s own scientists, assesses the same outbreak indicators and has put out detailed reports on issues such contact tracing, reopening schools and pubs, and relaxing social distancing(AP Photo/Matt Dunham, File)