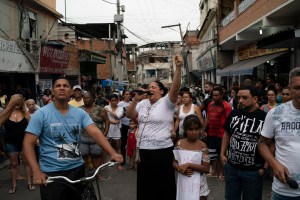 A woman prays during a protest demanding justice for 8-year-old Agatha Sales Felix who was killed by a stray bullet at the Alemao complex slum in Rio de Janeiro, Brazil, Saturday, Sept. 21, 2019. According to the police, Sales Felix died after she was hit by a stray bullet on Friday night, during a confrontation with alleged drug traffickers and police officers. However residents said there was no exchange of gun fire at the time Sales Felix was hit by the stray bullet.