When you climb up a set of stairs to look over Boston Metal’s newest project, it becomes clear just how big a job it is to cut steel’s climate impact.

The impressive new installation is a pilot reactor that the startup will use to make emissions-free steel. It’s about the size of a school bus, set down into the floor of the research facility; the stairs, with freshly painted yellow railings, lead to the top. But in the steel industry, which produces nearly 2 billion tons per year, this setup’s potential output is a drop in the bucket.

Industrial steelmaking spits out about two tons of carbon dioxide emissions for every ton of steel produced—adding up to nearly 10% of such emissions worldwide. The global steel market is expected to grow about 30% by 2050, the date by which some of the largest steelmakers have pledged to reach net-zero emissions. Unless major changes come to the industry, and fast, that goal might be out of reach.

Boston Metal’s new reactor, recently installed at its headquarters just north of Boston, is a significant step on the company’s journey to going commercial. Since its founding in 2013, the startup has developed a process to make green steel, working out the details in smaller vessels. The new reactor, along with a coming fundraising round, represents the next leap for the company as it tries to scale up.

If Boston Metal can indeed scale its clean production process and access enough renewable electricity to run it, the company could help solve one of the world’s toughest challenges in controlling carbon emissions.

Steel is used in everything from cars to buildings to wind turbines, but decarbonizing the industry isn’t glamorous. “People don’t pay too much attention to the industrials,” says Tadeu Carneiro, Boston Metal’s CEO. “It’s a very conservative industry, and it’s difficult to abate.”

Fossil fuels are essential to today’s steel production. Most steelmaking starts in a blast furnace, where a coal-derived material called coke, which is almost pure carbon, reacts with iron ore, a mixture of iron oxides and other minerals. The reaction pulls out the oxygen, leaving behind liquid iron. The carbon and oxygen are then released together as carbon dioxide.

Boston Metal’s solution is an entirely new approach, called molten oxide electrolysis (MOE). Instead of using carbon to remove oxygen, the process relies on electricity, which runs through a cell filled with a mixture of dissolved iron oxides along with other oxides and materials. The electricity heats the cell up to about 1,600 °C (nearly 3,000 °F), melting everything into a hot oxide soup.

In addition to heating things up, electricity drives the oxygen-removing chemical reactions. Molten iron gathers at the bottom of the reactor, and oxygen gas is emitted instead of carbon dioxide.

Because the impurities largely stay out of the reaction, the MOE process can handle low-quality iron ore, which could be a major benefit of the technology, Carneiro says.

Boston Metal’s steelmaking process was developed by MIT materials researchers Donald Sadoway and Antoine Allanore in the mid-2000s. Research progressed in small reactors about the size of a coffee cup; these lab versions now produce a peanut-size amount of iron within a couple of days. 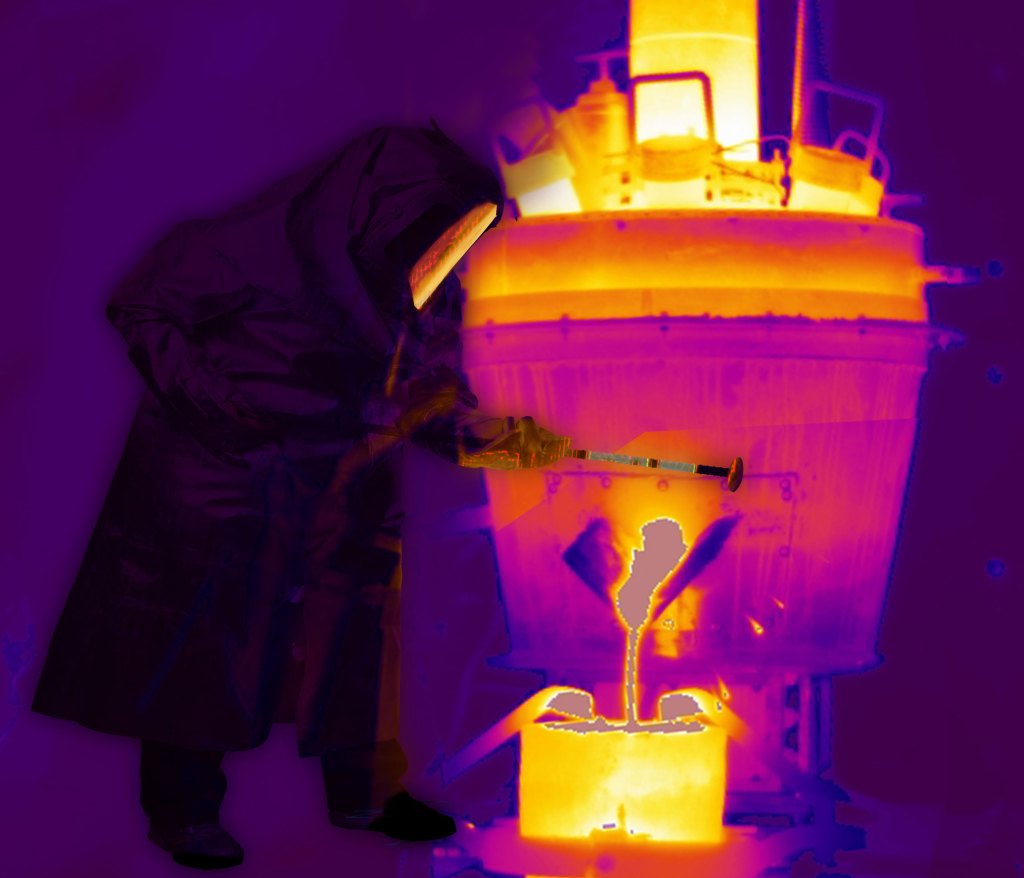 A new way to make steel could cut 5% of CO2 emissions at a stroke
Boston Metal has developed technology to electrify steelmaking, and a pending funding round will kick-start a large demonstration project.

A major challenge so far in transitioning to larger reactors has to do with the stability of the inert anode, a metal piece made from a mixture of steel and chromium, says Stephan Broek, Boston Metal’s senior vice president of technology. If the reactor runs as it should, the anode doesn’t participate in the reaction: it just provides a way for electricity to move through the cell. But the anode tends to degrade quickly if the balance between conditions like current distribution and electrolyte chemistry isn’t quite right.

This and other challenges could get even more serious with the new pilot reactor, which is about a thousand times bigger than the research version.

The new reactor will run a current of up to 25,000 amperes (a typical home uses between 100 and 200). It’s outfitted with multiple anodes and all the trappings of the eventual first industrial-size cell, which will be about 10 times bigger still.

Construction on the pilot reactor is almost finished, and tests are slated to begin in August. First, it will be used with carbon anodes to produce ferroalloys, high-value metals that can be produced in an electrolysis process similar to the one used to make steel. After the reactor is tried out for that product, the team plans to convert it for use in steelmaking sometime early next year, Broek says.

Starting up the pilot reactor represents one of Boston Metal’s biggest remaining milestones before building a commercial-size demonstration project, which will be made up of five larger cells strung together and should be completed in 2026. The startup is in the process of raising the money to carry it through to that point.

Once it has a commercial facility up and running, the company plans to license its technology and work with existing steelmakers to install and run the reactors.

But a process like MOE, which is novel to the industry, would take time to integrate with existing players. “It still needs a couple of years of piloting and demonstration in order to prove that you can actually scale it,” says Max Åhman, an energy and environmental systems professor at Lund University in Sweden. “And you don’t really know yet what it would cost.”

Other new approaches now in the testing stages may be more straightforward to demonstrate and scale, Åhman says. In particular, a process called direct reduction, which is widely used today, can be modified to produce emissions-free steel.

Direct reduction typically uses natural gas to react with solid iron ore, yielding iron. This process, like smelting in a blast furnace, also releases carbon dioxide, because it’s the carbon in the gas, which is mostly methane, that reacts with the oxygen in the ore to separate it from the iron. But if hydrogen is used in place of natural gas, water vapor is emitted instead.

Swedish steelmaker SSAB is building a large pilot facility to test hydrogen-powered direct reduction that is slated to reach industrial-scale production around 2026.

Carneiro acknowledges that steelmakers using hydrogen might have a head start, though he argues that MOE will eventually be attractive to some steel manufacturers, especially because it can use a wider range of starting materials than just the high-quality ore required for direct reduction.

Whether steelmakers turn to hydrogen or an electricity-powered process like Boston Metal’s MOE, though, they’ll need a lot more renewable electricity in order to actually cut emissions.

One estimate from researchers at Columbia University found that if global steel production in blast furnaces were all converted to Boston Metal’s MOE process, it would take over 5,000 terawatt-hours of electricity to run them—about 20% of global power consumption in 2018. Producing steel with hydrogen would also come with high electricity requirements.

If that electricity comes from fossil fuels, switching steelmaking to electricity would be trading one source of emissions for another. But if it comes from renewables or other carbon-free sources, it could make a significant dent in carbon pollution.

The researchers also found that electricity prices would have to drop significantly to make the process economical.

Despite the promises of new technologies, there’s still a long road ahead before they actually deliver any emissions reductions. “There’s a lot of greenwashing in the steel industry, in addition to people being optimistic about very early-stage progress,” says Rebecca Dell, director of the industry program at nonprofit organization ClimateWorks.

“It's easy, if you’re not paying attention, to mistake excitement about early-stage projects for much more progress,” she adds.

Boston Metal may have many steps left to producing green steel at a significant scale, but Carneiro, at least, is excited to keep following the path. His energy spills over as he describes the company’s plans and considers the future. “I don’t think there is any other opportunity in the world as big as this,” he says. “It’s really huge.”

“You need steel for everything,” he says. And with all eyes on an industry that’s one of the biggest carbon polluters on the planet, he adds, “the sense of urgency is there now.”