You may never have heard of Hikvision, but chances are you’ve already been captured by one of its millions of cameras. The Chinese company’s products can be found anywhere from police surveillance systems to baby monitors in more than 190 countries. Its ability to make decent-quality products at cheap prices (as well as its ties with the Chinese state) has helped make Hikvision the largest manufacturer of video surveillance equipment in the world.

But while Hikvision’s close links with the Chinese government have helped it grow, it is these links that may now be its undoing. The firm has helped build China’s massive police surveillance system and tailored it to oppress the Muslim minority groups in Xinjiang. As a result, the US government has imposed several sanctions on it in the last three years. This year, the US Treasury is reportedly considering adding Hikvision to the Specially Designated Nationals and Blocked Persons (SDN) List, usually reserved for countries like North Korea or Iran.

SDN designation would ban anyone anywhere in the world from doing business with Hikvision, a sanction much harsher than the Chinese company Huawei is experiencing now. Countries and companies would risk being added to the same list if they didn’t comply. While the millions of Hikvision cameras currently in use won’t have to be replaced overnight, they won’t be available for sale in the future. “It may basically turn Hikvision into a domestic company very quickly,” says Conor Healy, who researches Hikvision at IPVM, an online trade publication for the video surveillance industry.

How did this 21-year-old Chinese firm rise to global prominence, and how closely is it connected to the Chinese government? Why don’t Western governments trust the company anymore, and what do the impending sanctions mean for its future? Here’s everything you should know about Hikvision as a once under-the-radar firm heads towards becoming the most sanctioned tech company in the world.

Established in 2001, Hikvision was perfectly placed to capitalize on the trend toward upgrading security in the aftermath of 9/11. It started by selling video capture cards that are used in surveillance systems, but it introduced its own video cameras in 2007. Today, it sells everything from software to hardware, usually at prices much cheaper than international competitors’.

Its founding team consisted mostly of engineers at China Electronics Technology Group Corporation, a state-owned company that makes electronic products for both civilian and military uses. In 2008, Hikvision transferred 48% of its shares to CETC, making Hikvision officially a subsidiary of a state-owned firm.

As in many countries, the biggest surveillance client in China is the government. With the help of its state background, Hikvision soon started getting big and small contracts from local governments to build policing or traffic control systems. Most notably, it became an important part of China’s Skynet and Sharp Eyes policing projects, which aim to put cameras on every street to monitor citizens. For example, Hikvision scored a $125 million contract in 2018 to build or update 45,000 cameras in the Chinese city of Xi’an, 16,000 of which should be equipped with human detection or facial recognition functions. 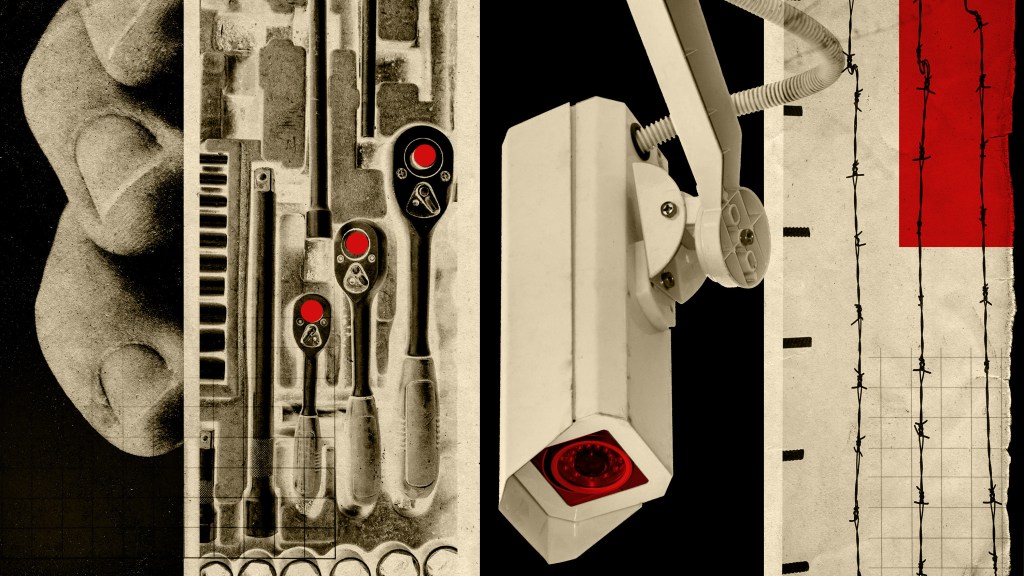 A new report sheds light on a shadowy industry where authoritarian states enthusiastically export surveillance technologies to repressive regimes around the world.

But Hikvision has also been aiming to go global since the start. It started registering its name as a trademark in over a hundred countries as early as 2004. In 2010, it was the top digital video recorder provider in the world thanks to its network of surveillance cameras, which use DVRs to record the footage. Overseas sales made up 27% of its $12.42 billion in revenue in 2021.

It’s hard to know exactly how many Hikvision cameras are being used around the world, but research in 2021 by industry research group Top10VPN used the Shodan search engine (which scans the internet for the unique IP addresses used by devices, in this case cameras) to find 4.8 million networks of Hikvision devices in 191 countries outside China.

With over 600,000 Hikvision networks, the United States has the second-highest number of the company’s cameras, just after Vietnam (The research couldn’t identify most camera networks in China.) Each of these detected IP networks can support up to 24 Hikvision cameras, meaning the total numbers of cameras will be even higher. And that is only a conservative estimate, because not all the cameras appear in Shodan scans.

For example, the research found 55,455 Hikvision networks in London. “From my experience of just walking around London, it would probably be several times over that. They're in almost every supermarket,” says Samuel Woodhams, a researcher at Top10VPN who carried out the study.

The prevalence of Hikvision cameras overseas has caused anxieties around national security, even though it hasn’t been proved that the company transfers its overseas data back to China. In 2019, the US passed a bill banning Hikvision from holding any contracts with the federal government.

What really made Hikvision infamous on the global stage was its involvement in China’s oppressive policies in Xinjiang against Muslim minorities, mostly Uyghurs. Numerous surveillance cameras, many equipped with advanced facial recognition, have been installed both inside and outside the detention camps in Xinjiang to aid the government's control over the region. And Hikvision has been a big part of this activity. The company was found to have received at least $275 million in government contracts to build surveillance in the region and has developed AI cameras that can detect physical features of Uyghur ethnicity.

Presented with questions about Xinjiang by MIT Technology Review, Hikvision responded with a statement that did not address them directly but said the company “has and will continue to strictly comply with applicable laws and regulations in the countries where we operate, following internationally accepted business ethics and business standards.”

“The ways [companies like Hikvision] are able to hold people in place through the checkpoints and face recognition systems have turned the entire region, from the Uyghur perspective at least, into a flexible [but] closed system. They often talk about it as an open-air prison,” says Darren Byler, an anthropologist at Simon Fraser University and the author of In the Camps: China's High-Tech Penal Colony. “And that really wouldn’t be possible without these tech companies.”

Adding Hikvision to the SDN would do more than ratchet up tensions between the US and China—it would open up a new front in international sanctions, one in which tech companies increasingly find themselves embroiled in geopolitical power struggles.

People could be criminally prosecuted for working or doing business with the company once the sanction is announced, says Healy: “[Hikvision] can no longer interact with the US dollar or the US financial system. And other banks and other financial institutions around the world, generally speaking, will also not do business with you, because they want to maintain their access to the US dollar and to US financial markets.”

At the very least, this would mean Hikvision wouldn’t be able to sell its cameras outside China, and its international revenues would fall to zero. But it’s unclear whether governments and companies already using Hikvision cameras would be asked to replace them immediately. Then things get even trickier when it comes to the Hikvision services beyond the hardware. Can current Hikvision users accept software updates from the company? Use the company’s cloud storage? “That's exactly the kind of thing [the US government] might make an exception for here,” says Healy, because traditional enforcement of the SDN list may become impractical in the digital era.

Traditional sanctioning tools are not designed for the internet. “We are in an era of US innovation and precedent setting and breaking in terms of restrictive measures,” says Jon Bateman, a senior fellow in technology and international affairs at the Carnegie Endowment for International Peace.

No big tech company that has products sold around the world has ever been put on the SDN list. Huawei, the current poster child for tech companies caught in US-China tensions, is restricted from buying US products, receiving US investment, or selling in the US, but Huawei products are still sold outside the US. If Hikvision does end up on the SDN list, it will be an important case to study how technologies, both hardware and software, can be banned internationally.

US diplomats are reportedly already briefing foreign governments on what the US intends to do with Hikvision, according to the Financial Times. The tougher sanctions will likely be welcome in some countries, like the UK and Norway, which have conducted their own investigations into Hikvision’s complicity in human rights violations in Xinjiang. But Bateman warns that because the sanction is primarily a unilateral decision by the US, not every other country will necessarily agree with its severity and the scale. “The more the US government uses these unilateral tools, the more questions will be raised in foreign capitals about, well, do we have a voice in the use of these tools, and if so, how much?” he says.

For its part, China has voiced its support for Hikvision; in response to news of the potential sanction a foreign ministry spokesperson accused the US of “abusing state power and domestic law to wantonly suppress Chinese companies.”  But other countries will be unlikely to publicly defy the US if the sanction goes through. The thriving domestic market in China may still keep Hikvision alive, but it will be a big setback for Chinese companies hoping to make their name abroad.