A few years ago, Jamie Gravell needed help. She was working full time as a research assistant while finishing her dissertation, her son had just turned two, and the housework was piling up, even after she’d repeatedly asked her husband to do more. So she downloaded Cozi. It’s one example of an increasingly popular solution: chore apps designed to help families split housework more fairly. Gravell’s hope was that her husband would do more to lighten her load without her having to keep asking.

It was a disaster. “It doesn’t solve the problem: that you’re nagging someone else or parenting your partner,” she says. “It doesn’t empower or engage the other person to be a part of the family team.” Within a week, Gravell had ditched the app. Cozi “just didn’t work,” she says.

On paper, chore apps could help to solve the very real problem that women in heterosexual couples still shoulder a disproportionate amount of the housework. They could get male partners to become more like, well, partners. But as Gravell discovered, these apps might actually be doing the very opposite.

They regularly end up forcing women—and especially mothers, who often have even less time and emotional bandwidth—to take on the additional burden of using technology to assign tasks. Indeed, according to Cozi’s data, 90% of its users are married or in a committed relationship, 86% are women, and 86% have kids at home. In other words, even though the tool is ostensibly designed to make their job easier, it ends up giving moms something else to do. Cozi did not respond to our requests for comment at the time of publication.

Women don’t have time for this. Over the last few decades, North American women have been taking on more housework than ever before, even as 25% of them earn more than their husbands, according to a recent study by Joanna Syrda, an economist at the University of Bath in the UK. One refrain Syrda told me she heard over and over again from working mothers: “We are so exhausted.” 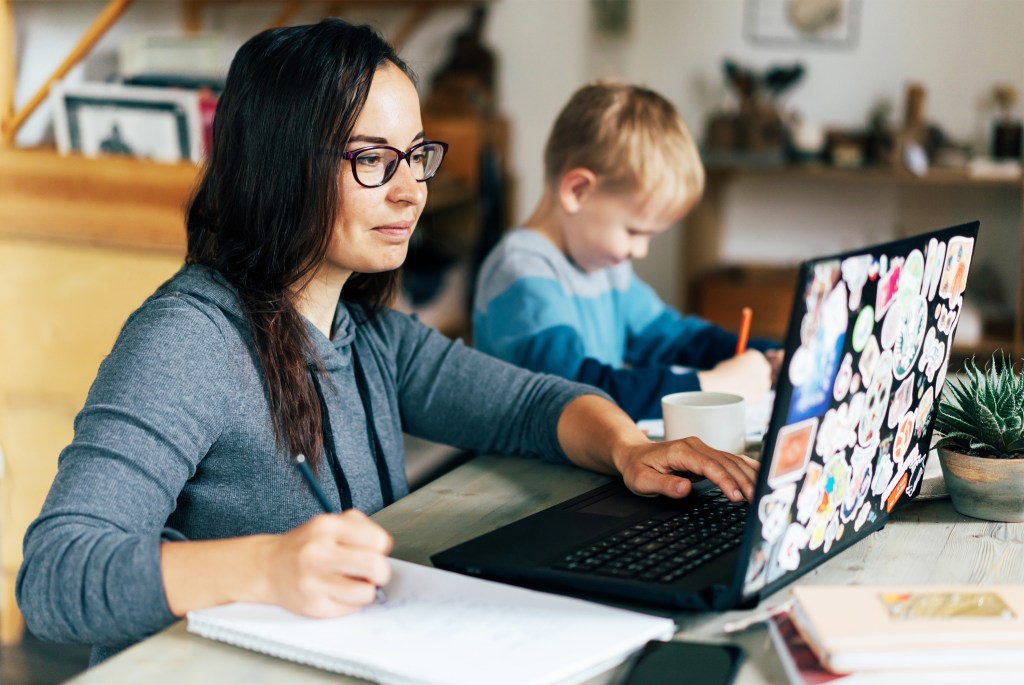 Meet the parents using Trello to plan their kids’ coronavirus homeschooling
Families in indefinite lockdown are turning to Asana and Trello to run their households.

Chore apps are designed to help divide housework within a family more fairly, but they all work in a different way. Some, like Cozi, have a single member of the household delegate chores to the others. These tend to be the most popular type of app, but as Gravell discovered, they’re limited by the fact that they put the onus on one person.

Some newer apps are challenging that model: they offer incentives for doing housework, often by gamifying tasks. Cortney Williamson tried one, Nipto, after she found herself getting resentful of the growing amount of housework she was taking on. The app let Williamson and her husband assign points for each chore based on how tedious or unpleasant it was and then set up rewards—picking up a luxury snack or going to watch a nice movie—for the person with the highest score.

The system appealed to Williamson because she and her husband are gamers—and it worked. “The workload shifted dramatically,” she says. “I still found myself doing a little more, but the split went from something like 90-10 to more like 60-40.”

Some apps mimic enterprise software. Michael Perry, founder of the app Maple, says his apps—inspired by workplace tools like Slack and Trello—put tasks in a “dumping ground” where family members can choose them via chat, without needing one person to delegate.

Other approaches take their inspiration from research into domestic inequality. Rachel Drapper, a research associate at Harvard Business School, has been working to integrate research on how couples can more successfully split housework into a forthcoming app, FairShare. “Many solutions are targeting women, and we thought that was missing the point,” she says. Drapper’s solution—which is still just a prototype—is to crowdsource data on how households split their chores and use the results to inform other households about what works and what doesn’t.

The trouble is that these apps face an enormously difficult task in trying to overturn deeply rooted societal norms—girls in the kitchen with their mothers, boys playing with their fathers. Such expectations are part of what leaves women in heterosexual couples with so much of the housework (same-sex couples are noticeably more egalitarian). Once women become mothers, the imbalance gets worse.

Still, the issue is not if men can play an equal part in housework but how. Men in more egalitarian cultures, unsurprisingly, take on a much fairer share. And in those places, if neither partner has the time or energy, the government itself may come to their aid. In Sweden, which tops the Gender Equality Index in the EU, the state pays half the bill for hiring out chores like laundry and house cleaning—which means many more busy families can afford to do so. That, in turn, helps women’s earning potential. In Belgium, a similar state subsidy for outsourcing chores led to a significant increase in women’s employment.

In the United States, however, many women—mothers or not—are at a crisis point, with little in the way of safety nets like affordable or subsidized child care or healthcare.

Part of the reason apps may be struggling to make a serious dent in women’s housework load is that much of the labor women do is not physical, but mental and emotional. The burden still falls mostly on women to anticipate the needs of those around them and make day-to-day decisions on behalf of the family, says Allison Daminger, a doctoral student in sociology at Harvard. These tasks might include researching the best deal for a couch or remembering that it’s time to schedule a child’s visit to the dentist. It’s time-consuming work, even if it’s mostly hidden from others.

Chore app design regularly further embeds the status quo: that it’s usually women who delegate household tasks. “I can’t think of a time [in my research] where a man made a list for his wife, but I can think of several instances where a wife made a list for her husband,” Daminger says.

Jaclyn Wong, an assistant professor of sociology at the University of South Carolina, is not only an expert on the role of gender expectations in couple dynamics. She’s also piloting her own app, a chore calendar that tries to dodge gendered traps—woman handles the cooking, man handles the yard work— by dividing the full range of household tasks between both partners. It also aims to put into writing exactly what each person is doing.

Williamson says that making the invisible labor visible in this way was one huge benefit of using her chore app. “It did help me to notice when my husband was contributing, and it helped my husband to notice that so many more chores exist than just sweeping, vacuuming, cooking, and dishes,” she says.

But not everyone enjoys seeing that discrepancy between a couple’s contributions. Wong’s research shows that this is an uphill battle: “There’s pushback. People get defensive when they are notified of ways they are not being equal partners,” she notes. The risk is that couples may abandon an app for that reason even if it could help them in the long run.

While apps may be easy to access and use, they often seem to just paper over gender inequalities in the home. In fact, they can sour relationships if they’re seen as a “management tool” rather than a “partnership tool,” says Kate Mangino, author of an upcoming book, Equal Partners, about how to improve gender equality in households.

“One of the ways we excuse gender inequality is ‘She’s the manager, and I’m the helper,’” Mangino says, paraphrasing how a husband might feel. It makes for a strange power dynamic that the apps just reinforce.

Most important for an app’s success is buy-in by the partner who has been doing less, and that is impossible to guarantee. “The work in managing the app is still going to be seen as women’s work,” says Wong. “We have constructed these norms that women and mothers have the final say.”

Ultimately, a chore app can only do so much to get an unwilling partner to pitch in, and it can’t undo centuries of sexism. It can help to make who does what around the house more visible, but it can’t change the situation unless both members of a couple have bought into the need for change—and that remains the biggest barrier.

“I’m often approached by [chore app] entrepreneurs, and the feedback I almost always give is, ‘How are you going to ensure male uptake in engagement?’” says Daminger. “That’s the biggest hurdle, and I don’t know of anyone who has cracked that.”

Correction: A previous version of the story referred to Cortney Williamson using the wrong name. It has been updated with her correct one.