The day I spoke to Jennifer Doudna was a tough day: the US Patent Office had just ruled against her university on CRISPR’s most important uses, handing the commercial rights to her rivals at the Broad Institute of MIT and Harvard.

Doudna is the co-discoverer of CRISPR editing, the revolutionary method for engineering genes that, 10 years after her original breakthrough, is now making its way into human trials. There’s an expanding list of applications in diagnostics and engineered plants; already researchers are exploring potential treatments to cure sickle cell disease, blindness, and liver disease. In 2020, she shared a Nobel Prize with fellow scientist Emmanuelle Charpentier. The two became the sixth and seventh women to win the award in chemistry.

Doudna heads the Innovative Genomics Institute at the University of California, Berkeley, and the work coming out of her laboratory continues to focus on the molecular details of how the CRISPR system works. Perhaps more than anyone, she has been able to relay to the public the formidable power of versatile gene editing as well as the possible downsides of the technology. I spoke to her about this and other issues, including the surprising reality of a legal system where the key patent could go to someone other than the one accepting a Nobel for the discovery.

AR: Just yesterday the patent office ruled against Berkeley in a long-running patent case over CRISPR. What are your reactions to that?

JD: It doesn’t really make sense to me, [but] I’m pleased that we have our 45 issued patents, our 40 pending patents, all in the US. And our 30 European patents are unaffected by the ruling. And honestly, look, I’m carrying on with my research.

AR: I always thought the origin of the patent fight was not about money. My own reading of why it was so strongly fought was that it was not over commercial control but over credit—who did the science—and the truth.

JD: That’s your speculation. It’s hard to say, isn’t it? I don’t know what others’ motivations may have been, Obviously, it will be appealed. Obviously, we don’t agree with the decision. And obviously, 30 countries and the Nobel Prize Committee also don’t agree, if you’re talking about who invented what, at first.

AR: What does it tell you about how the patent system operates that there could be one person accepting a Nobel Prize but then the patent going elsewhere? Should that make sense to people?

JD: It doesn’t really make sense to me. I don’t know if it makes sense to other people. In the scientific community I don’t think there’s much question about what happened.

AR: You have been the subject of a book by Walter Isaacson, who also wrote biographies of Steve Jobs and Leonardo da Vinci. What was it like to participate in your biography?

JD: Humbling and a little bit terrifying, if I’m honest. Although I have to say I felt fortunate that someone as talented as Walter was interested in the story, because he’s a wonderful writer. He did a great job of trying to capture the feeling we all had of being part of this incredible transformation that happened with CRISPR.

AR: You recently became the chief science advisor to a Wall Street firm called Sixth Street. What are you planning to do there, and why did you take on that role?

JD: I’m excited that at Sixth Street we can identify the right teams, the right opportunities, the right openings where financing could really accelerate the science and the business opportunities. One area where I think there’s a lot of potential is using machine learning to analyze data that are coming out of CRISPR. We know that one of the important opportunities with CRISPR in the future is to understand genomics, meaning the function of genes. And frankly not individual genes but whole sets of genes and pathways and different cell types comprehensively. The types of data that come from those efforts clearly contain a huge amount of information, much of it subtle. And so using machine-­learning algorithms to mine those kinds of data sets, I think, will be very powerful. You could imagine using that type of strategy to understand the genetics of disease—our individual susceptibilities—and to identify new therapeutics.

AR: I always think of you as sort of a scientist’s scientist. I once saw a picture of you leaning over a student’s shoulder, and that’s who you are in my mind. But this is asking you to do something a little bit different. Why do you think you could be good at picking technologies for commercial investment, as opposed to the most intriguing scientific questions?

JD: I love science, and my best days are when I am leaning over a student in the lab looking at data. But I’ve come to appreciate that for CRISPR to have an impact in the next decade is going to require real capitalization of the right teams.

AR: A survey in Harvard Business Review found that only 2.3% of VC money was going to startups led by women. Were you shocked to learn that? 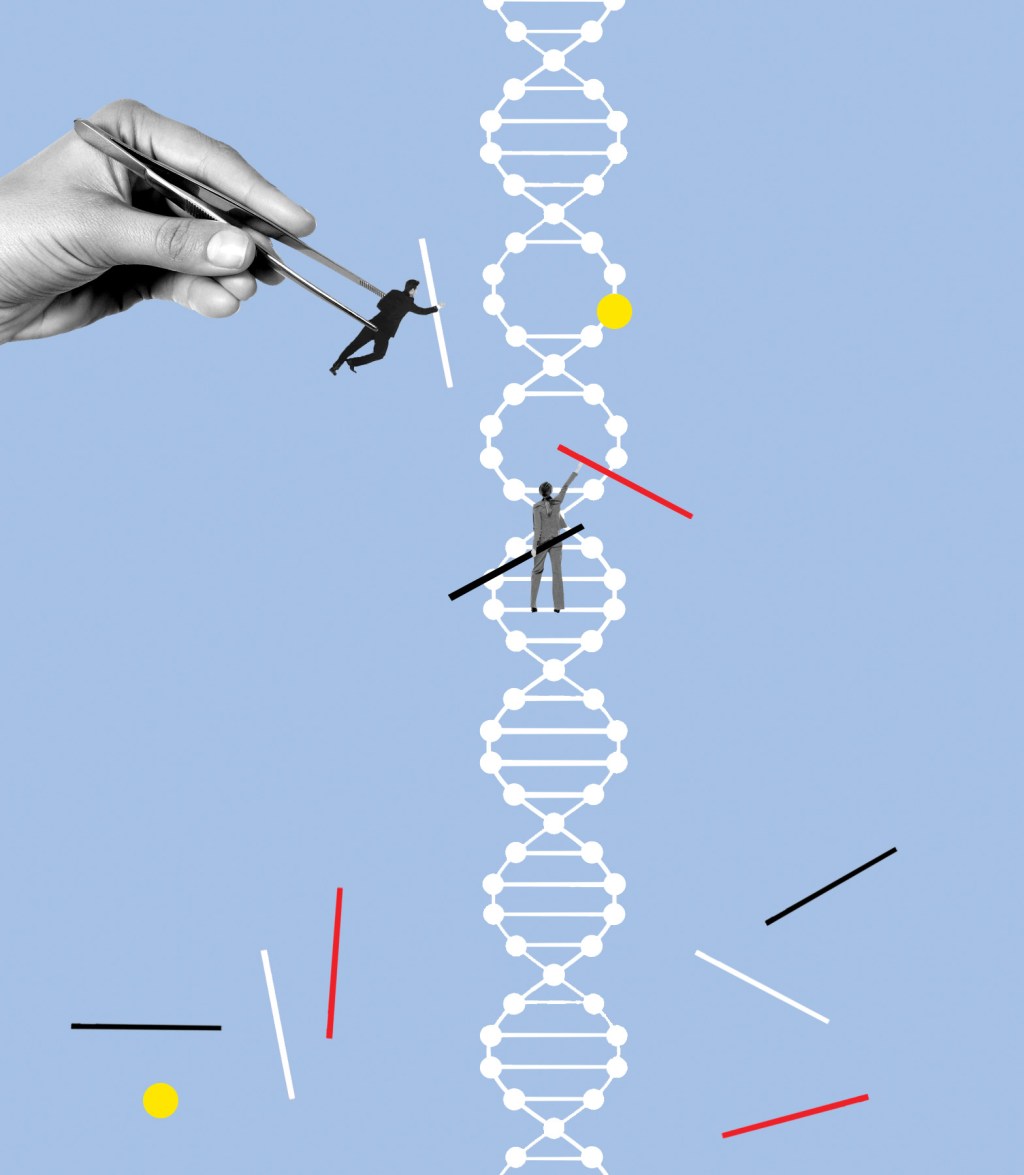 Three books explore the He Jiankui affair and what gene editing means for the future of humanity.

JD: Disappointed, maybe; not shocked, though, because I’ve been in that world long enough now to see it up close and personal.

AR: You have a couple of former students, Rachel Haurwitz, the CEO of Caribou Biosciences, and Janice Chen, one of the cofounders of Mammoth Biosciences. Those are prominent examples of women who’ve gone on to start CRISPR companies. What’s your understanding of how the challenges or barriers for women differ in industry and academia?

JD: Women are often not as connected in the biotech and venture worlds. It’s hard to exactly explain or understand quite why that is, but it seems to be the case. So one of the things that we’re seeking to do at the institute here is support female entrepreneurs. We just had an announcement about our Women in Enterprising Science program. This is a philanthropy-­funded opportunity where we’re hoping to support more diversity, in biotech especially. It’s to give women the kind of connections they are going to need—the kind of training that will help them make good pitches to venture groups, build teams, assume leadership roles, and feel confident in their abilities to run teams. I think these are all things where we can be helpful.

AR: What is the state of commercialization of CRISPR right now? How’s it been going?

JD: Amazingly. It’s just an incredible time. A number of companies that started up over the last decade have already gone public, and many more are at various stages of building their efforts. We’re seeing very exciting announcements from clinical trials and seeing sustained, long-lasting impact on patients. Increasingly we’ll see exciting advances in other sectors as well. Agriculture comes to mind.

There’s been a lot of focus on clinical medical uses of CRISPR. However, I suspect that over the next decade, when we think about global impact and impact on daily lives, that’s where the uses in agriculture and even to address climate change will potentially have a much broader impact. Pam Ronald, who is a professor at UC Davis and one of our affiliated faculty at the IGI, has been able to use CRISPR to engineer drought-tolerant rice and is in the process of field-testing these plants here, locally, in California. Something that’s farther out, but I think also potentially very high impact, is using CRISPR in microbial communities, in the soil or in water, that will allow us to enhance their capabilities for carbon capture.

AR: I wanted to ask two questions about hereditary genome editing. CRISPR babies. From what I understand, you’ve never been in favor of that. But you’ve also not wanted to sign on to attempts to ban it. What’s been the evolution of your thinking?

JD: My feeling about it has been consistently that it should not be used clinically right now. I think we’re still at a point where it’s not appropriate to use CRISPR in human embryos for the purpose of creating a pregnancy. And why not? Well, because the technology is not well vetted in that system. And I don’t think we’ve seen a clear argument for a real medical need for that approach. Thirdly, there hasn’t been an opportunity for widespread societal consideration of the implications of that type of use to make heritable changes in human beings.

AR: It’s hard to identify a necessary medical use. But it’s quite a bit easier to identify a speculative enhancement use. For instance, there probably are versions of genes that protect people against Alzheimer’s. If I could give my child one of those, that would be great. What are your thoughts about the future use of CRISPR to improve people by, say, increasing their resistance to disease?

JD: I think it’s very possibly a direction that CRISPR could go. I’m quite interested in it for the reasons that you just stated. Not for so-called enhancements, but to improve the quality of life for people, whether it’s in a disease like Alzheimer’s that is so destructive for so many families, and has a huge economic impact, or something like cardiovascular disease, with a similarly huge impact societally and financially. If there were a way in the future to use CRISPR to protect people, generally, from susceptibility to those types of diseases through genetic changes, I think that has to be considered.