If all goes to plan, next month SpaceX will launch the largest rocket in human history. Towering nearly 400 feet tall, the rocket – Starship – is designed to take NASA astronauts to the moon. And SpaceX’s CEO, Elon Musk, has bigger ambitions: he wants to use it to settle humans on Mars.

Much has already been made of Starship’s human spaceflight capabilities. But the rocket could also revolutionize what we know about our neighboring planets and moons. “Starship would totally change the way that we can do solar system exploration,” says Ali Bramson, a planetary scientist from Purdue University. “Planetary science will just explode.”

If it lives up to its billing, scientists are already talking about sending missions to Neptune and its largest moon in the outer solar system, bringing back huge quantities of space rock from Earth’s moon and Mars, and even developing innovative ways to protect Earth from incoming asteroids.

Starship—which is being built at a Texas site dubbed “Starbase”—consists of a giant spaceship on top of a large booster, known as Super Heavy. Both can land back on Earth so they can be reused, reducing costs. The entire vehicle will be capable of lifting 100 metric tons (220,000 pounds) of cargo and people into space on regular low-cost missions. The volume of usable space within Starship is a whopping 1,000 cubic meters—big enough to fit the entire Eiffel Tower, disassembled. And that’s got scientists excited.

“Starship is, like, wow,” says James Head, a planetary scientist from Brown University.

In mid-November, speaking in a publicly accessible virtual meeting about Starship hosted by the US National Academies of Sciences, Engineering, and Medicine, Musk discussed the project’s scientific potential. “It’s extremely important that we try to become a multiplanet species as quickly as possible,” he said. “Along the way, we will learn a great deal about the nature of the universe.” Starship could carry “a lot of scientific instrumentation” on flights, said Musk—far more than is currently possible. “We’d learn a tremendous amount, compared to having to send fairly small vehicles with limited scientific instrumentation, which is what we currently do,” he said.

“You could get a 100-ton object to the surface of Europa,” said Musk.

Central to many of these ideas is that Starship is designed to be not just large but cheap to launch. Whereas agencies like NASA and ESA must carefully choose a smattering of missions to fund, with launch costs in the tens or hundreds of millions of dollars, Starship’s affordability could open the door to many more. “The low cost of access has the potential to really change the game for science research,” says Andrew Westphal, a lecturer in physics at the University of California, Berkeley, with flights potentially as low as $2 million per launch. “You can imagine privately financed missions and consortia of citizens who get together to fly things.” 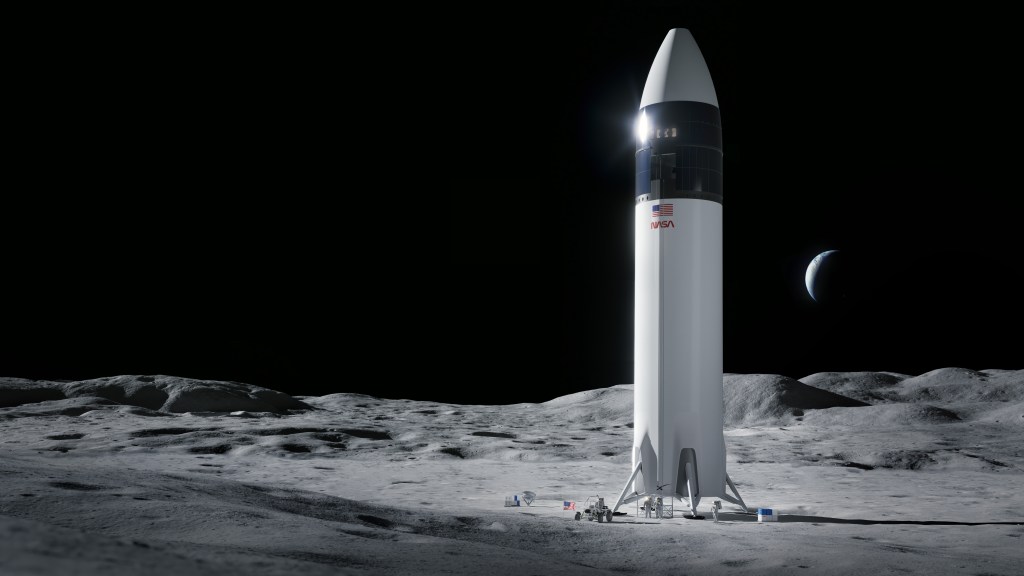 When the first astronauts in over 50 years set foot on the moon, they’ll be riding to the surface aboard Starship.

What’s more, Starship has a key advantage over other super-heavy-lift rockets in development, such as NASA’s much-delayed Space Launch System and Blue Origin’s New Glenn rocket. The upper half of the rocket is designed to be refueled in Earth orbit by other Starships, so more of its lifting capability can be handed over to scientific equipment rather than fuel. Taking humans to the moon, for example, might require eight separate launches, with each consecutive “tanker Starship” bringing up fuel to the “lunar Starship” that then makes its way to the moon with scientific equipment and crew.

Scientists are now starting to dream of what Starship might let them do. Earlier this year, a paper published by Jennifer Heldmann of NASA Ames Research Center explored some of the scientific opportunities that might be opened by Starship missions to the moon and Mars. One great benefit is that Starship could carry full-sized equipment from Earth—no need to miniaturize it to fit in a smaller vehicle, as was required for the Apollo missions to the moon. For example, “you could bring a drilling rig,” says Heldmann. “You could drill down a kilometer, like we do on Earth.” That would afford unprecedented access to the interior of the moon and Mars, where ice and other useful resources are thought to be present. Before, such an idea have been “a little bit insane,” says Heldmann. But with Starship, “you could do it, and still have room to spare,” she adds. “What else do you want to bring?”

Because Starship can land back on Earth, it will also—theoretically—be able to bring back vast amounts of samples. The sheer volume that could be returned, from a variety of different locations, would give scientists on Earth unprecedented access to extraterrestrial material. That could shed light on a myriad of mysteries, such as the volcanic history of the moon or “the question of life and astrobiology” on Mars, says Heldmann.

Starship could also enable more extravagant missions to other locations, either via a direct launch from Earth or perhaps by using the moon and Mars as refueling stations, an ambitious future envisioned by Musk.

One idea, from an international group of scientists called Conex (Conceptual Exploration Research), is a spacecraft called Arcanum, which would make use of Starship’s heavy-lifting capabilities to explore Neptune and its largest moon, Triton. Neptune has been visited only once, a flying visit by NASA’s Voyager 2 spacecraft in 1989, and there is so much we still don’t know about it. “Nobody’s really thinking on this next level about what Starship could enable,” says James McKevitt, a researcher at the University of Vienna and the co-lead of Conex. “That’s what Arcanum is designed to showcase.”

Weighing in at about 21 metric tons, the spacecraft would be four times heavier than the largest deep space probe to date: NASA and ESA’s Cassini-Huygens mission, which explored Saturn from 2004 to 2017. No existing rocket could currently launch such a craft, but Starship would make it possible. Arcanum would have numerous components, including an orbiter to study Neptune, a lander to study Triton, and a penetrator to strike Triton’s surface and “perform a seismic experiment” to understand its geology and its structure, says McKevitt. The mission could also be equipped with a telescope, allowing for studies of the outer solar system and aiding the hunt for planets around other stars.

Other ideas are even more speculative. Philip Lubin, a physicist from the University of California, Santa Barbara, calculated that a large enough rocket, such as Starship, could be used to prevent an asteroid from hitting Earth. Such a mission could carry enough explosives to rip apart an asteroid as large as the 10-kilometer-wide rock that wiped out the dinosaurs. Its fragments would harmlessly burn up in the atmosphere before it had a chance to reach our planet.

Starship could also be a better way to launch giant space telescopes that can observe the universe. Currently, equipment such as NASA and ESA’s upcoming James Webb Space Telescope must be launched folded up, an expensive, complex, and delicate procedure that could be prone to error. NASA has suggested that a proposed super-telescope called LUVOIR designed to image Earth-like planets around other stars could launch on Starship, while Musk has said SpaceX is already working on “an interesting project, which is to have a really big telescope, taking a lens that was intended for a ground-based telescope, and creating a space-based telescope with it.” No further details have yet been revealed.

Say hi to the neighbors

Elsewhere, some scientists have dreams of using Starship to prepare to visit other stars. René Heller from the Max Planck Institute for Solar System research in Germany and colleagues say that Starship could offer a low-cost way to test technologies for a spacecraft that can travel multiple light-years to neighboring star systems. Starship could release a sail-powered spacecraft on a trip to Mars, which would use an onboard laser to push against a thin sail and reach incredible speeds, enabling a demonstration to be conducted beyond Earth’s orbit. “If SpaceX were kind enough to take one of our sails on board and just release it halfway on its journey to Mars, we should be able to follow its acceleration and path through the solar system for a few days and almost to the orbit of Jupiter,” says Heller.

Other ideas include using Starship to send a probe to orbit Jupiter’s volcanic moon Io, a difficult task without a substantial lifting capability. “It’s extremely challenging because of both getting into orbit and protecting yourself from Jupiter’s harsh radiation,” says Alfred McEwen, a planetary geologist from the University of Arizona. “But mass helps those things. You can have plenty of fuel and radiation shielding.”

Musk has suggested that SpaceX could launch as many as a dozen Starship test flights in 2022, with missions to the moon and Mars both on the horizon—and plenty of scientific potential to boot. “Once Starship starts flying, the development will be very fast,” says Margarita Marinova, a former senior Mars development engineer at SpaceX. “There will be so many more people who will be able to fly things.” Those could be anything from standalone missions using Starship to ride-along missions on the existing flight manifest. “When you have a 100-ton capability, adding on science hardware is pretty easy,” says Marinova. “If somebody wants to buy payload space, they can have payload space. It will be a really drastic change in how we do science.”

There are, of course, very good reasons to be cautious. While Starship has flown test flights without the Super Heavy booster, we have yet to see the full rocket launch. It’s an extremely massive and complex machine that could still experience problems in its development. SpaceX and Musk, too, have previously been notoriously cavalier (to put it politely) with timelines and goals (a proposed mission to Mars, Red Dragon, was once supposed to have launched as early as 2018). And Starship’s proposed method to reach the moon and Mars, relying on multiple refueling missions in Earth orbit, remains complex and untested.

Yet there are also plenty of grounds for excitement regarding what Starship could do if it is successful. From the inner to the outer solar system, and possibly beyond, it may well open up a whole new era of space science. “I'm sure that some very smart people are starting to think about sending scientific missions on Starship,” says Abhishek Tripathi, a space scientist from the University of California, Berkeley.

Or as Musk put it: “It’s really whatever you can imagine.”

The Emirates Mars Mission is monitoring and measuring the climate and atmosphere of the red planet, but this effort also helps promote and advance science at a national level.