With the supply-chain disruptions of the past two years showing no signs of easing anytime soon, businesses are turning to a new generation of AI-powered simulations called digital twins to help them get goods and services to customers on time. These tools not only predict disruptions down the line, but suggest what to do about it. Desperate companies struggling with the collapse of just-in-time shipping are using them to find a crucial balance between efficiency and resilience.

The list of things that have been hard to get hold of at one time or another in the last few months is as varied as it is long: new cars, new phones, contact lenses, cleaning products, fresh produce, garden furniture, books, the color blue. “It’s not like when everyone ran out of toilet paper in March 2020,” says Chris Nicholson, founder of Pathmind, a company that applies AI to logistics problems. “This time the missing items feel personalized.”

Covid-19 has shined a spotlight on many of the world’s networks, from the internet to international air travel. But the supply chains that crisscross the world—the ships and trucks and trains that link factories to ports and warehouses, bringing almost everything we buy many thousands of miles from where it’s produced to where it’s consumed—are facing more scrutiny than they ever have.

“It’s fair to say that whatever you’re selling, you’ve got a problem right now,” says Jason Boyce, founder and CEO of Avenue7Media, a consulting firm that advises top Amazon sellers. Boyce says he has clients who would be turning over tens of millions of dollars a year if they could stay in stock. “We’re having talks with clients every day where they’re just crying,” he says. “For months, they haven’t been fully in stock for one 30-day period in a row.” 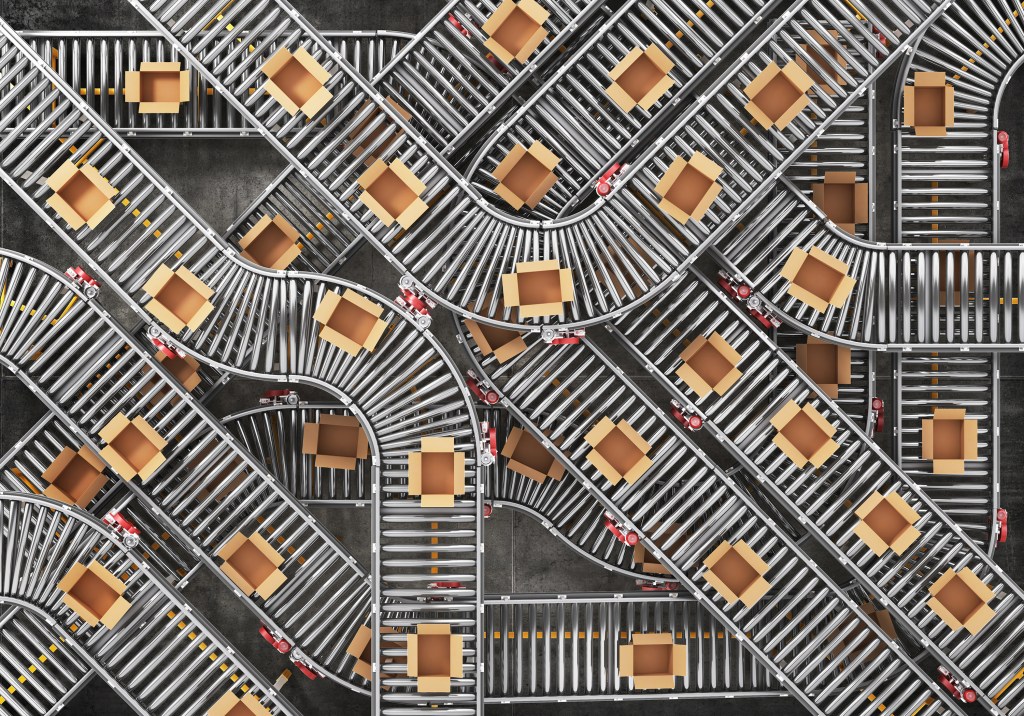 Our weird behavior during the pandemic is messing with AI models
Machine-learning models trained on normal behavior are showing cracks —forcing humans to step in to set them straight.

Digital twins seek to solve breakages in the supply chain by anticipating them before they happen and then using AI to figure out a workaround. The name captures the key idea of simulating a complex system in a computer, creating a kind of twin that mirrors real-world objects—from ports to products—and the processes they are a part of. Simulations have been a part of decision-making in industry for some years, helping people explore different product designs or streamline the layout of a warehouse. But the availability of large amounts of real-time data and computing power means that more complex processes can be simulated for the first time, including the chaos of global supply chains that often rely on numerous vendors and transportation networks.

This kind of technology has given Amazon, which already has the advantage of controlling its own trucks and warehouses, an extra edge for years. Now others are embracing it as well. Google is developing supply-chain digital twins that the car maker Renault announced it had started using in September. International shipping giants like FedEx and DHL are building their own simulation software. And AI firms like Pathmind are creating bespoke tools for anyone who can pay for them. Yet not everyone will benefit. In fact, the powerful new technology could widen a growing digital divide in the global economy.

It’s easy to blame the pandemic for the current supply-chain problems. Factory closures and labor shortages knocked out production and delivery hubs at the same time that a leap in online shopping and comfort buying sent demand for home deliveries rocketing.

But in truth, the pandemic only made a bad situation worse. “There are global forces driving this, all combined into a perfect storm,” says D’Maris Coffman, an economist at University College London who studies the effect of the pandemic on supply chains.

Quelling this storm will require sinking trillions of dollars into global infrastructure, expanding ports and delivery fleets, and investing in better management, better working conditions, and better trade deals. “Technology is not going to solve these problems. It’s not going to allow ships to carry more containers,” says David Simchi-Levi, who leads the data science lab at the Massachusetts Institute of Technology and has helped build digital twins for several large companies. But AI can help companies weather the worst of it. “Digital twins allow us to identify issues before they happen,” he says.

According to Hans Thalbauer, the managing director of the supply chains and logistics team at Google, the biggest problem businesses face is an inability to forecast events up the chain. “It doesn’t matter which company you talk to,” he says. “Everyone in the supply-chain world will tell you they don’t have the visibility they need to make decisions”

It’s supply-chain visibility that lets Amazon, for example, predict when an item will show up on your doorstep. For every item that Amazon delivers itself—and that includes the millions of items it delivers on behalf of third-party sellers like Boyce and his clients—it gives an accurate estimate of when it will arrive. It might not seem like much, says Boyce, but if Amazon got these predictions wrong, it would start losing customers—especially around the holiday season, when people are buying last-minute gifts and trusting Amazon to deliver them. “It takes massive computing power just to show that simple little delivery day,” he says. “But people freak the hell out when they don’t get their stuff on time.”

It’s no surprise that others want a crystal ball of their own. Just-in-time supply chains are nearly dead. The disruptions of the past two years sank many businesses that chased hyper-efficiency to an extreme. Warehouse space is expensive, and paying to store inventory you might not need for a week can seem extravagant in times of plenty. But when next week’s stock doesn’t show up, you have nothing to sell.

“Before the pandemic, most companies were focusing on cutting costs,” says Simchi-Levi. Now they’re willing to pay for resiliency, but focusing on resiliency alone is also a mistake: you need to find the right balance between the two. This is the real power of simulations. “We’re seeing a growing number of companies starting to stress-test their supply chains using digital twins,” he says.

By exploring different possible scenarios, companies can identify the balance between efficiency and resiliency that works best for them. Add deep reinforcement learning, which lets an AI learn through trial and error what actions to take in different situations, and digital twins become machines for exploring what-if questions. What if there’s a drought in Taiwan and the water shortage shuts down microchip manufacturing? A digital twin could predict the risk of this happening, trace the impact it would have on your supply chain, and—using reinforcement learning—suggest what actions to take to minimize the harm.

If you’re a car maker in the US Midwest, a digital twin might suggest you buy extra components from a distributer on the West Coast that still has surplus. But thread multiple scenarios together and things soon become vastly complex. For example, according to Simchi-Levi, Ford maintains more than 50 plants around the world, which use 35 billion parts to produce 6 million cars and trucks each year. There are around 1,400 suppliers spread across 4,400 manufacturing sites that it interacts with directly, and a stack of suppliers and suppliers’ suppliers up to 10 layers deep between Ford and the raw materials that go into its vehicles. Any one of those links could break, and a good stress test would need to probe each of them.

Digital twins draw on as much data as possible to run their simulations and train their AIs. There’s logistical information about the company and its suppliers, accounting for inputs such as inventory and shipping data. Then there’s data on consumer behavior, based on market analysis and financial projections. And data about the wider world, such as geopolitical and socioeconomic trends. Simchi-Levi has even drawn data from social media to predict people’s behavior, especially during the pandemic.

Google’s digital twin can be plugged into Google Earth and takes into account global weather patterns. If you’re a vegetable farmer in California, you can run simulations to see which of your fields are at risk from La Niña, says Thalbauer. When Google sets up a digital twin for a client such as Renault, they can choose which of the many available data sources to include. 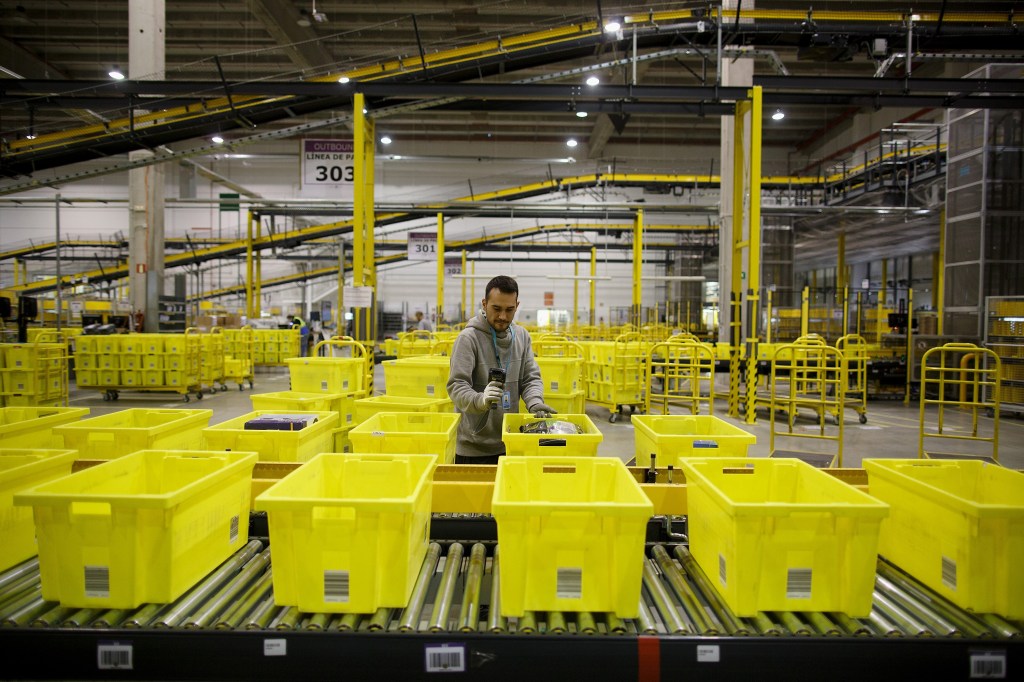 How lockdown is changing shopping for good
Big online stores are based around vast automated warehouses. Smaller and cheaper versions of this tech will be key if smaller stores are to survive through a series of lockdowns.

Pathmind takes a less heavyweight approach. Its digital twin simply wraps around a company’s existing supply-chain management tools, tapping into the data they already produce. It then augments this data by running what-if simulations and adding the resulting synthetic data to the pot on which it trains its AI. The approach is similar to how AlphaZero mastered Go and chess by playing millions of virtual games against itself. Instead of learning what piece to move on a board, digital twins can learn what stock to order and when, or where to open a new warehouse.

With the right synthetic data, a digital twin can learn to respond to previously unseen events, even global pandemics. “This is where we get into the whole secret of ‘Why is AI smart?’” says Nicholson. “It lives more than we do, in these many different worlds, some of which have never existed before.”

In theory, anyone can benefit from this technology. In practice, there will be winners and losers. “Digital-twin technology presents a powerful opportunity for companies of any size,” says Rick Lazio, a lawyer and former US congressman who is now senior vice president at Alliantgroup, a US-based tax consultancy. But he notes that it’s larger companies, which are already the best protected from losses, that are starting to use this tech fastest.

Lazio thinks that many smaller firms will need some help, perhaps through government investment, to stop them from falling behind. “Companies that adopt technology early see benefits greater than the sum of its parts,” he says.

And it’s not just smaller businesses. “A lot of the world’s ports run on paper; if you’re lucky, they’re using PDFs and emails,” says Nicholson. “These are major operators, not a candle maker in New Hampshire. But without digitization, we don’t get AI.”

Simchi-Levi is more optimistic. Many businesses used to assume that setting up a digital twin would take enormous investment and years to pay for itself, he says, but that’s no longer the case: a million dollars and 18 months can give you many of the benefits.

Simchi-Levi has no doubt that the buzz around digital twins will remain even once the worst of the current disruptions are over. If it’s not the pandemic, it will be something else, he says. The last couple of years have taught businesses how to prepare better, and how to compete better. “When we go back to normal, it won’t be the same as before,” he says. “The pandemic proved that the future is here.”