The dinosaurs didn’t have a space program, so when an asteroid headed toward Earth with their name on it 65 million years ago, they had no warning and no way to defend themselves. We know how that turned out.

Humans are, understandably, keen to avoid the same fate. Later this year, NASA will launch a mission to practice how we might deflect a future Earthbound asteroid. The Double Asteroid Redirection Test (DART) is targeted to launch as soon as November 24 (or as late as February 2022) and will take a year to reach its target: Dimorphos, a stadium-size asteroid that is orbiting a much larger asteroid called Didymos.

The plan is to hit Dimorphos at a speed of 6.5 kilometers per second with the car-sized DART spacecraft, which weighs about a third of a ton, changing its almost-12 hour orbit around Didymos by a few minutes. A European Space Agency mission arriving five years later, called Hera, will check to see if the mission worked. The impact will have only a small effect on the orbit, but that should be enough to deflect an asteroid from Earth’s path in the future—so long as we hit it far enough in advance. “We’re doing this to have the ability to prevent a truly catastrophic natural disaster,” says Tom Statler, DART program scientist at NASA headquarters in Washington, DC.

The potential changes to the orbit of Dimorphos have been well studied. But until now we haven’t known much about what will happen to Dimorphos itself after the impact. A paper published in the journal Icarus documents the first simulations to find out. 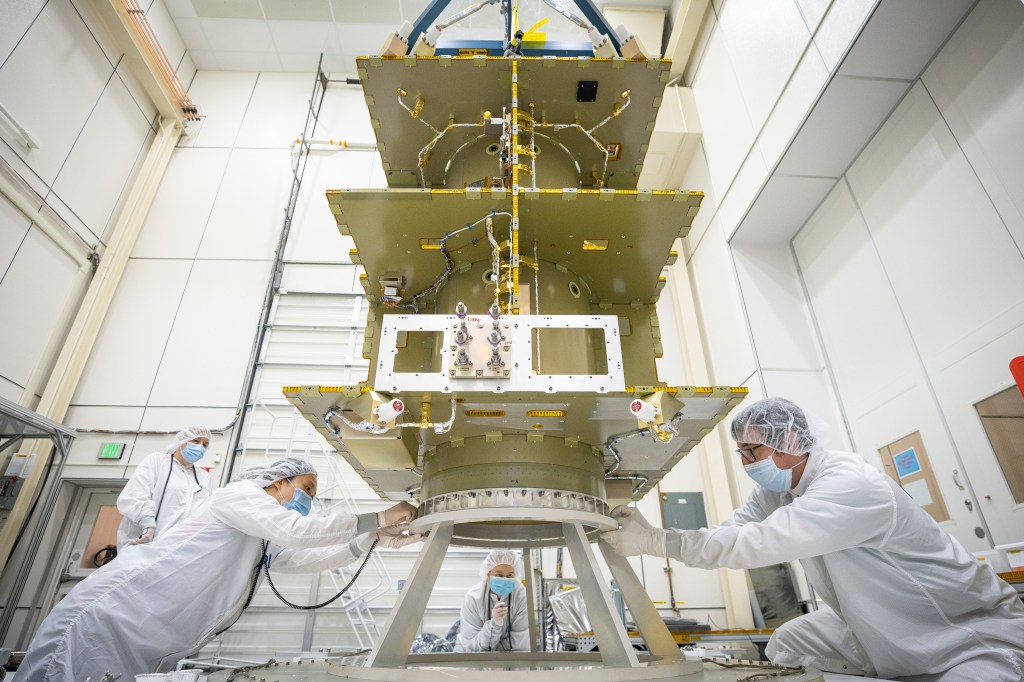 This spacecraft is being readied for a one-way mission to deflect an asteroid
Can slamming into a space rock at 15,000 miles per hour prevent it from hitting Earth? The DART mission aims to find out.

Led by Harrison Agrusa from the University of Maryland, researchers modeled how much DART might change the spin or rotation of Dimorphos by calculating how the momentum of the impact will alter the asteroid’s roll, pitch, and yaw. The results could be dramatic. “It could start tumbling and enter a chaotic state,” says Agrusa. “This was really quite a big surprise.”

The unexpected spinning poses some interesting challenges. It will add to the difficulty of landing on the asteroid, which ESA hopes to attempt with two small spacecraft on its Hera mission. It could also make future attempts to deflect an Earthbound asteroid more complicated, as any rotation can affect an asteroid’s path through space.

When DART slams into Dimorphos, the energy of the impact will be comparable to three tons of TNT exploding, sending thousands of pieces of debris spewing into space. Statler describes it as a golf cart traveling at 15,000 miles an hour smashing into the side of a football stadium. The force of the impact will not cause any immediate changes to Dimorphos’s spin, but within days things will start to change, according to Agrusa and his team.

Soon, Dimorphos will start to wobble very slightly. This wobble will grow and grow as the momentum from the impact throws the rotation of Dimorphos out of balance, with no friction in the vacuum of space to slow it down. Dimorphos may start to spin one way and another. It may start to rotate along its long axis, like a rotisserie. To an observer on Didymos looking into the sky, this seemingly sedate satellite will take on a new form—starting to swing wildly back and forth, its previously hidden sides now coming into view.

Within weeks, Dimorphos could spin so much that it enters a chaotic tumbling state where it is spinning uncontrollably around its axes. In more extreme scenarios the tidal lock with Didymos could break completely and Dimorphos might start flipping “head over heels,” says Agrusa.

Exactly what will happen will depend on a few things. Dimorphos’s shape will play an important part—if it’s more elongated rather than spherical, it’ll spin more chaotically. Radar observations so far suggest it is elongated, but we won’t know until just hours before DART hits, when it gets its first views of its small target.

The location of the impact will play a part too. DART will be aiming for the center of Dimorphos, the goal being to impart the greatest amount of force so as to alter its orbit, but the more off-center it is, the more chaotic the resulting spin will be. In most scenarios, however, Dimorphos should be dramatically swinging back and forth or tumbling in many directions within weeks.

When ESA’s Hera mission arrives five years later, the scene could be quite dramatic, with Dimorphos spinning wildly in its orbit around Didymos as a result of humanity’s influence. It will likely be decades or even centuries before the gravitational tug of Didymos returns Dimorphos to its original, presumed tidally locked, state. “The possibility that Hera might find Dimorphos in a chaotic tumbling state is really interesting and really exciting,” says Statler.

Hera’s arrival will be the only way we’ll know for sure what has happened to the spin of Dimorphos, as DART will be destroyed by the impact and Dimorphos is too small to be seen in detail from Earth. A small Italian-made satellite called LICIACube will be deployed prior to the impact and will take images during the event as it whizzes past, but it will only do so for a few minutes—not long enough to watch the wobbling take hold.

Hera is also planning to deploy two smaller satellites that will attempt to land on the surface of Dimorphos. The tumbling motion is not expected to hamper these efforts, but it could make them more difficult. Without proper planning for the chaotic rotation, the two small vehicles could bounce around and not quite end up where scientists want. “Landing on such a small body is hard anyway,” says Patrick Michel from the French National Centre for Scientific Research (CNRS), one of the mission leads on Hera and a coauthor on Agrusa’s paper. “But [this] doesn’t make it easier.”

The tumbling motion of Dimorphos is not expected to affect DART’s dress rehearsal for one day saving Earth, nor will it pose any danger to us on the planet, but there could be some scientifically useful information from the event. The spin state of asteroids could affect other properties, such as how much sunlight they reflect, which can have an impact on their trajectories—possibly something to take into account on a future asteroid deflection mission. “It’s not as simple as just crashing a spacecraft into the asteroid,” says astronomer Paul Wiegert of the University of Western Ontario. “There’s a lot of physics you need to understand.”

Observing the system for years, decades, or even centuries will also give us an unprecedented opportunity to see how a binary asteroid system evolves after experiencing an impact like this. Hera alone could give us an indication of how strong the tidal effect is in returning the system to its normal state, helping us understand the gravitational relationship between two asteroids such as these.

We’re about to see what happens when we slam a golf cart into a stadium. The results could be, well, rather chaotic. “It’s very cool,” says Federica Spoto, who studies asteroid dynamics at the Harvard-Smithsonian Center for Astrophysics in Massachusetts. “We’re really modifying a system.”

"Countdown" is an exclusive dive into the first all-civilian mission into orbit, but it spends too much time as a free advertisement for SpaceX.

The Decadal Survey, expected at the end of September, sets the tone for a new era of space exploration. One team of researchers wants the survey to use AI to forecast growing science fields. 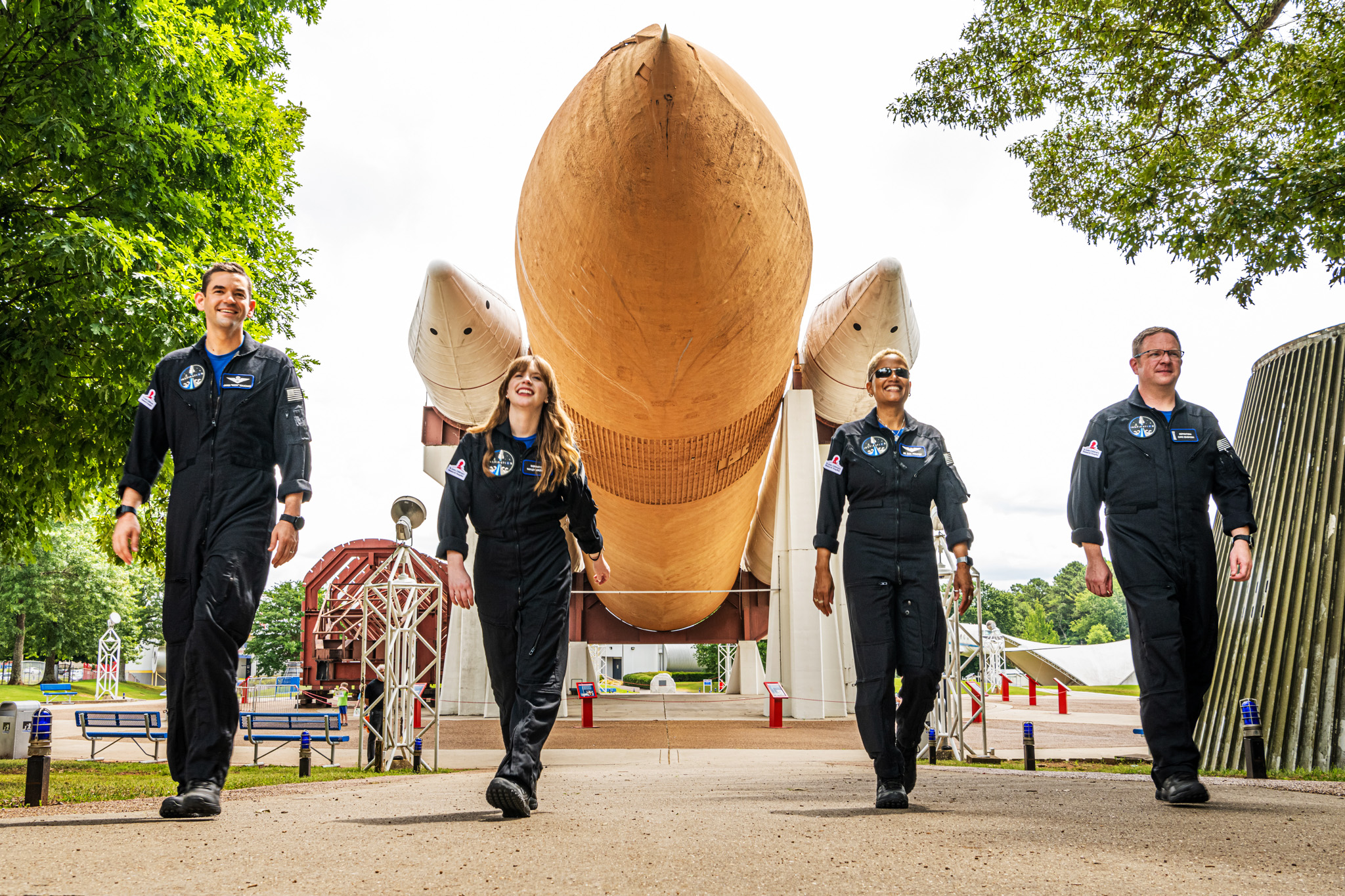 Inspiration4: Why SpaceX’s first all-private mission is a big deal

Is it finally time to be cautiously optimistic about the future of crewed space travel?