New York City will be the first city in the US to require proof of vaccination to enter a variety of indoor places, the city’s mayor announced yesterday.

Mayor Bill de Blasio told a press conference that starting September 13, the city will start requiring the proof at indoor venues like bars, restaurants, and gyms. The so-called Key to NYC Pass (which, rather confusingly, is a program, not an actual pass) is part of a suite of efforts to fight the more-transmissible delta variant, as cases rise across the city.  About 66% of the city’s adults are fully vaccinated, and officials hope the new requirements will convince more people to get the shots. The announcement follows the CDC’s new indoor mask guidance for places with substantial or high transmission, which has included New York in recent days. 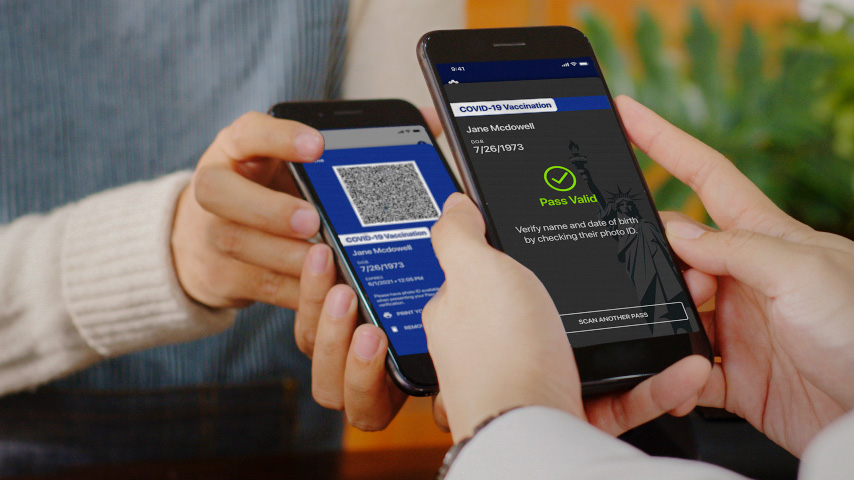 We tried out the first statewide vaccine passport

When we tested the first statewide vaccine passport, we found privacy concerns, technical glitches, and questions over who it’s really for.

The broader plan also includes vaccine incentives like $100 debit cards. “The goal here is to convince everyone that this is the time,” said de Blasio.

How it will work: To see a Broadway show, eat indoors at a restaurant, or use a gym, you’ll need to show proof that you’ve received at least one dose of a covid vaccine. (It won’t be needed for essentials, like grocery shopping.) Acceptable proof will include the state’s Excelsior Pass (which has faced a range of glitches and fairness concerns), as well as a new app released by the city, NYC Covid Safe. A paper card issued by the Centers for Disease Control and Prevention will also work. The requirement applies to both customers and employees of those places.

Some details are still spotty. For example, it’s unclear how the plan will work for kids under 12, who aren’t yet eligible for vaccination. (De Blasio said more information would be released in mid-August.) It’s also unclear how venue operators and workers will deal with the burden of verifying everyone. The NYC Hospitality Alliance said in a statement that the new requirement would be “a very difficult step and controversial for some.” For other businesses, it’ll be a welcome way to enforce policies that used to be voluntary.

The app for that: The NYC Covid Safe app offers fewer features than the state app and doesn’t connect directly to vaccine records. Instead it simply stores an image of a vaccine record. That makes it an easier tool for people whose vaccine record is stored outside the state, since US vaccine databases aren’t nationally centralized. But Albert Fox Cahn, who studies vaccine passports as executive director of the Surveillance Technology Oversight Project, points to some drawbacks. Because the city’s app is basically just storing a photo, it will accept pretty much anything as vaccine proof, making it remarkably easy to falsify credentials. “It's baffling to me that they would go to all this effort to basically reinvent the camera,” says Cahn.

S. Mitra Kalita, who founded the covid resource Epicenter-NYC, says that although the policies may be necessary to combat the delta variant, new tech shouldn’t detract from the bigger goal of helping more people to get vaccinated. “We are still encountering folks who don't know vaccines are free,” she says. “An app is one thing. We need many [other] things right now.”

The bigger picture: The US has faced a rocky road when it comes to vaccine apps and mandates. Many states have outright banned proof requirements. But there’s a sharp divide—San Francisco now has an alliance of hundreds of bars that are requiring some such proof. More and more employers have begun to require vaccines in recent days, including companies as disparate as Disney, Google, and Tyson.

Other countries, such as France and Italy, have faced backlash to recent mandates. The UK has been debating such a move. Israel canceled and then relaunched its “green pass.” (The Ada Lovelace Institute has a good list.)

What’s next: New York City’s effort is the country’s largest local, government-led initiative, which means success could pave the way for other US cities and towns. It may, as de Blasio hopes, encourage vaccinations. Or it could turn out to be more trouble than it’s worth. Some research points to the effectiveness of more basic incentives, like giving people time off work.

As with other pandemic-related tech interventions, the tricky thing will be figuring out whether it really helped to keep people safer, says Cyd Harrell, author of A Civic Technologist’s Practice Guide. She says she initially worried that vaccine passports would be a form of tech theater. But the delta variant has changed the equation.

“I can't be totally positive until we see the answer to that question about whether it improves public safety,” she says. “It might not be theater now.”