Neuroscientists have released the most detailed 3D map of the mammalian brain ever made, created from an animal whose brain architecture is very similar to our own—the mouse.

The map and underlying data set, which are now freely available to the public, depict more than 200,000 neurons and half a billion neural connections contained inside a cube of mouse brain no bigger than a grain of sand.

The new research is part of the Machine Intelligence from Cortical Networks (MICrONS) program, which hopes to improve the next generation of machine-learning algorithms by reverse-engineering the cerebral cortex—the part of the brain that in mammals is responsible for higher functions like planning and reasoning. A consortium of researchers led by groups from the Allen Institute, Baylor College of Medicine, and Princeton University collected the data.

“Some people think that maybe the fundamental secrets of human intelligence are to be found in studying the cortex,” says H. Sebastian Seung, a professor of computer science and neuroscience at Princeton and a lead scientist for MICrONS. “That’s why it’s been such a mysterious, glamorous subject in neuroscience.” As scientists learn more about the brain, their discoveries could lead to more humanlike AI.

Creating the map was a five-year project with three stages. The first involved taking measurements of what the mouse’s brain did when the animal was alive. This produced more than 70,000 images of active brain cells as the mouse processed visual information. Then MICrONS researchers cut out a small piece of the brain and sliced it into more than 25,000 ultra-thin pieces. Next, they used electron microscopy to take more than 150 million high-resolution images of those pieces. 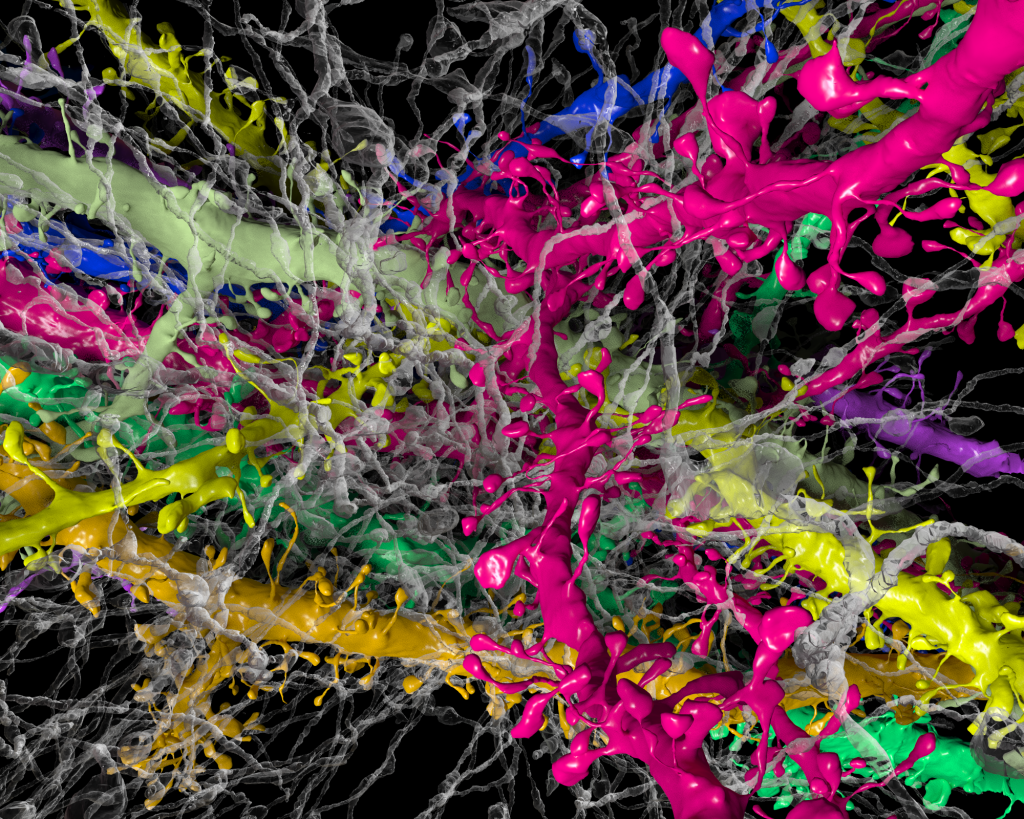 Inside the Moonshot Effort to Finally Figure Out the Brain

AI is only loosely modeled on the brain. So what if you wanted to do it right? You’d need to do what has been impossible until now: map what actually happens in neurons and nerve fibers.

Previous wiring diagrams, as the images are known, have mapped “connectomes” for the fruit fly and human brains. One reason MICrONS has been so well received is that the data set has the potential to improve scientist’s understanding of the brain and possibly help them treat brain disorders.

Venkatesh Murthy, a professor of molecular and cellular biology at Harvard University who studies neural activity in mice but was not involved in the study, says the project gives him and other scientists “a bird’s-eye view” into how single neurons interact, offering an exquisitely high-resolution “freeze frame” image that they can zoom into.

R. Clay Reid, a senior investigator at the Allen Institute and another lead scientist for the MICrONS project, says that before the program’s research was complete, he would’ve thought this level of reconstruction was impossible.

Reid says that with machine learning, the process of turning two-dimensional wiring diagrams of the brain into three-dimensional models has gotten exponentially better. “It’s a funny combination of a very old field and a new approach to it,” he says.

Reid compared the new images to the first maps of the human genome, in that they provide foundational knowledge for others to use. He envisions them helping others to see structures and relationships inside the brain that were previously invisible.

“I consider this, in many ways, the beginning,” says Reid. “These data and these AI-powered reconstructions can be used by anyone with an internet connection and a computer, to ask an extraordinary range of questions about the brain."