Power outages are a way of life in Africa’s most industrialized country. Over the last decade, South Africa’s electricity grid has come apart at the seams and failed to deliver dependable power. As renewable energy gets cheaper, South African cities such as Cape Town have demanded the right to find their own sources.

The primary culprit in South Africa’s power woes is the aging national electricity provider, Eskom. After years of mismanagement of state funds earmarked for critical infrastructure repairs, Eskom’s plants are regularly unable to operate at full capacity. The result is rolling blackouts that last from two to six hours per day. The power cuts have proved disastrous for the economy, with costs estimated at between $4 billion and $8 billion in 2019.

That year, desperate to find a solution, Cape Town announced plans to purchase its own power from independent renewable-power producers. The falling cost and exponential growth of renewable-energy technology have made this possible. Amazon recently announced it will build its own solar farm to power its data centers in South Africa, thereby insulating itself from outages on the national grid. If companies can do it, why can’t cities?

The answer is mired in a complex web of regulations and restrictions. The Ministry of Mineral Resources and Energy, in consultation with the National Energy Regulator of South Africa, has the sole power to decide where South African citizens get their energy, how it is sold, and what source is used to generate it. In practice, this gives Eskom, the state-owned provider, a monopoly over energy production and supply.

Six years ago, Cape Town demanded that the ministry grant it the authority to purchase renewable energy from independent power producers. Those producers would first deliver power directly to Cape Town via the grid, and if they generated more electricity than Cape Town needed, any surplus would flow out to the rest of the country.

The request ended in a court battle over constitutional questions about who gets to make such decisions. Given the strength of South Africa’s constitution in supporting citizens’ rights, the case has evolved into a larger fight for the rights of citizens to have dependable power.

Cape Town didn’t win that case, but the debate it started created political pressure. In October 2020 the government announced an amendment to electricity regulations that would allow municipalities to find their own methods of generating electricity or purchase it from independent producers.

However, the minister still has the final authority to sign off on any new electricity agreements involving cities. Moreover, President Cyril Ramaphosa underlined his commitment to a “centralized state-owned enterprise” model in February’s state of the union address, in which he outlined various ways his government was going to procure more power for the country. The energy battle between South African cities and the national government is entering a new, and arguably more aggressive, phase. 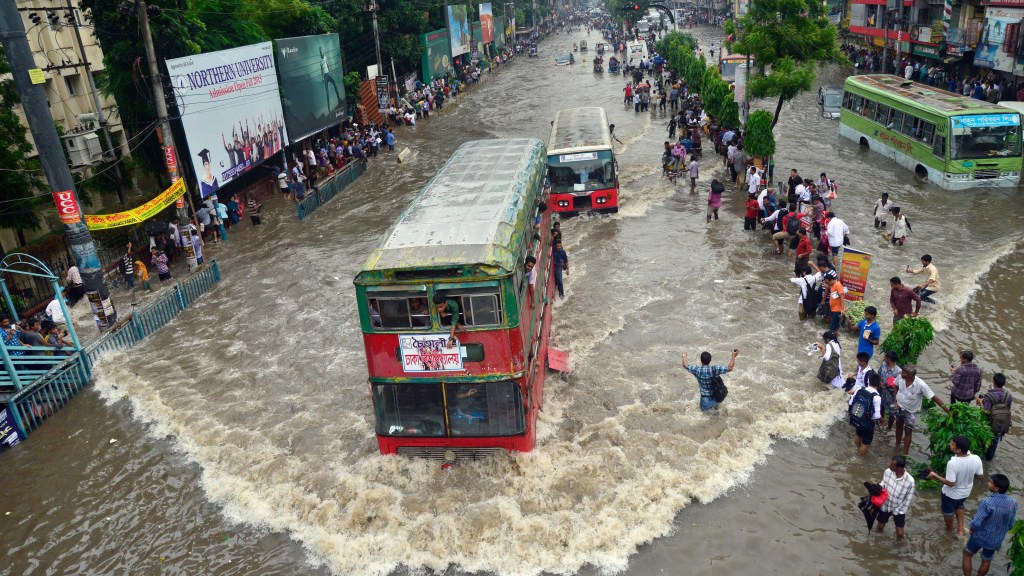 Satellite imagery reveals how floods are changing and who’s most at risk.

Since the October amendment was publicized, several cities have made plans to go it alone. Durban, South Africa’s third-largest city, announced its plan in January 2021. The city aims to get 40% of its energy from sources other than Eskom by 2030 and wants to use only clean energy by 2050.

And the sleepy university town of Stellenbosch, in the heart of South Africa’s wine country, has submitted a request to the national government to investigate alternative energy sources.

If Cape Town and other cities win the right to purchase their own electricity, rural areas in the country could benefit as well, because private companies will have financial incentives to produce more renewable power. More electricity production should help everyone.

Cape Town’s ongoing battle over clean energy is symbolic of political tensions between national and city governments that green tech is only accelerating.

By and large, city governance models are more agile than their national counterparts. For example, cities have been at the forefront of implementing the Paris climate agreement. Their ability to influence national and international politics will grow as more people continue to move there. Yet as South Africa demonstrates, national governments aren’t going down without a fight.

While the battle over energy sovereignty will almost certainly spread to more cities, not all areas will follow Cape Town’s approach. The Western Cape province, where the city is located, is blessed with ample wind and a relatively high number of sunny days. Renewable energy works well in this part of the world. Other cities may not be able to purchase their own renewable power so easily.

But clearly, the combination of an urbanizing population and the widespread availability of renewable power is challenging the way the modern nation-state controls energy policy. We can expect national-municipal splits like the one driving Cape Town’s energy crisis to become the rule, not the exception.

Joseph Dana is the senior editor of the weekly tech newsletter Exponential View. He lives in Cape Town.