China has urbanized with unprecedented speed. About 20 years ago, only 30% of the Chinese population lived in cities; today it’s 60%. That translates to roughly 400 million people—more than the entire US population—moving into China’s cities in the past two decades (the same proportional transition took 90 years to happen in Europe, and 60 years in the US). And this migration isn’t over; 70% of China’s population is expected to be urban by 2035.

To accommodate the influx, China’s national urban development policy has shifted from expanding individual cities to systematically building out massive city clusters, each of which will be home to as many as a hundred million people. Cities in a cluster will collaborate economically, ecologically, and politically, the thinking goes, in turn boosting each region’s competitiveness.

In the four stories that follow, we explore the origins of China’s new strategy and highlight three areas where the foundations for these city clusters are being laid—in the nation’s high-speed rail network, in the growth of its digital public services, and through regional environmental management.

The rise of the megalopolis

Some city clusters have formed organically over time.

In the 1950s, the French geographer Jean Gottmann noticed a new urban paradigm emerging on the northeast coast of the United States. The 1,000-kilometer-long region from Boston to Washington, DC, with its 30 million inhabitants, was, he found, increasingly functioning as one large city. Gottmann used the Greek word “megalopolis” to name this novel economic and political entity.

With its high population density, ease of transport, economic dominance, and cultural influence, the Boston-Washington megalopolis became home to the richest, best-educated, and best-serviced population in the country. “A megalopolis for a nation is what Main Street is for most communities,” wrote Gottmann’s colleague Wolf Von Eckardt. “It is the laboratory of a new urban way of life which is sweeping the civilized world.”

Other megalopolises soon appeared in different parts of the world. Among the most successful to date is Japan’s Taiheiyo Belt. Stretching nearly 1,200 kilometers from Tokyo through Nagoya to Osaka, the Taiheiyo Belt contains two-thirds of the Japanese population and accounts for 70% of national economic output.

Building such megalopolises in China—where they’re referred to as city clusters—seems to be the country’s best option for expanding access to urban opportunities without overwhelming cities, says Zhu Dajian, an economist who studies sustainable development at Tongji University in Shanghai.

Neighboring cities have, for example, been known to spend vast sums building redundant industries and then competing for primacy. Shanghai, for one, has tried to position itself as a hub for biotech and chip manufacturing by offering companies incentives to open plants there—but several nearby cities have launched nearly identical efforts. China is betting that more regional coordination will lead to more efficient investments nationwide. Such cooperation could also help alleviate overpopulation and pollution, which have plagued some of the country’s biggest urban centers.

While some cities established informal geographic and economic ties long ago, China only recently wrote the building of city clusters into its national policy in a systematic way. In 2014, President Xi Jinping called for a regional approach to developing Beijing as the leader of the capital region, known as Beijing-Tianjin-Hebei (Jing-Jin-Ji). Xi’s stance inspired immense interest in regional governance, and “city cluster” became an official term in government documents.

By 2035, five major city clusters are expected to be established in China: the Jing-Jin-Ji cluster in the north, the Yangtze River Delta cluster (east), the Pearl River Delta cluster (south), the Cheng-Yu cluster (west), and the Yangtze River Middle Reaches cluster in central China. Some of these have already started to take shape, while others are still on the drawing board. Combined, these areas could one day generate about half the nation’s GDP and house half its urban population. To connect the clusters, China aims to complete a grid of 16 new high-speed railway lines.

If all goes according to plan, the clusters will prove to be sustainable not only economically but also ecologically. By promoting public transportation, curbing repetitive production, and coordinating environmental management, says Liu Daizong of the World Resources Institute’s China office in Beijing, city clusters should “help China deliver its latest commitment to reaching carbon emission peak around 2030 and carbon neutrality by 2060.”

A nation on track

New rail lines will connect residents within and across clusters.

When Fang Hengkun was still a college student in Beijing, about 20 years ago, he used to go back home to the city of Dalian in Liaoning province by train for winter break. The 1,000-kilometer trip took 12 hours. He would arrive at the Beijing Railway Station three hours early because “it was the only train between Beijing and Dalian that day,” he says. 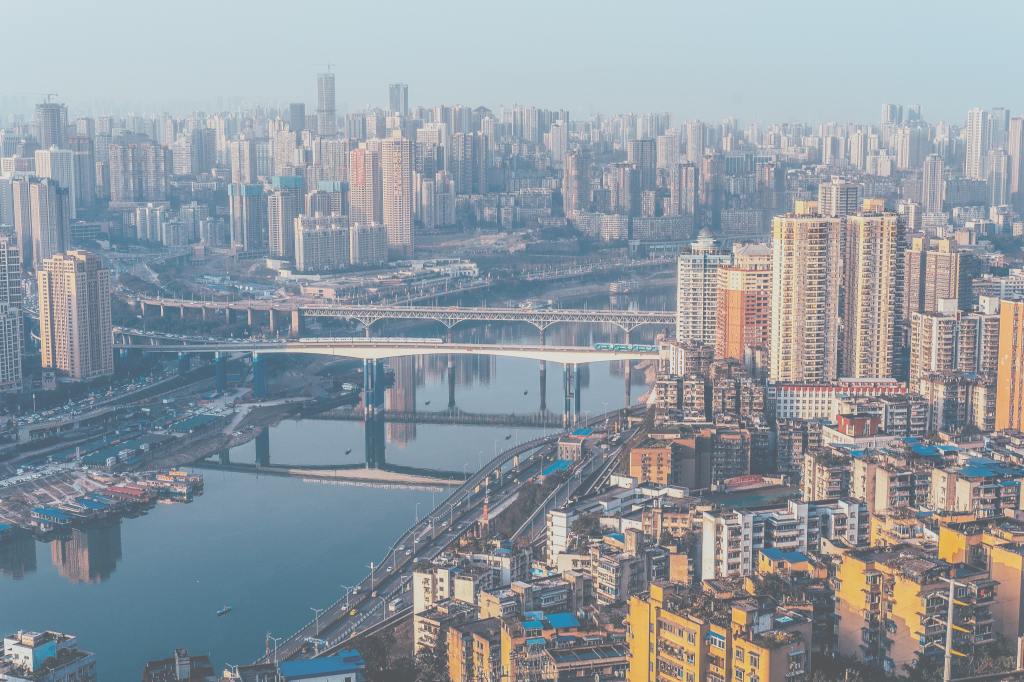 If China plans to go carbon neutral by 2060, why is it building so many coal plants?
The world’s largest climate polluter is trying to have it both ways.

Now a railway engineer working for Beijing’s municipal government, Fang is busy upgrading suburban lines and planning new ones to serve the rising demand in the nation’s capital. His team also plans to increase the frequency and accessibility of intercity trains that connect Beijing with more than 50 other cities. For example, to support the 100,000 daily commuters between Beijing and Tianjin, about 150 high-speed intercity trains are running every day, as often as three minutes apart.

According to a plan issued by the State Council in February 2021, China will be home to 200,000 kilometers of railways by 2035. One-third of them will be high-speed rails, which will account for about 60% of the total distance covered by all high-speed rail lines in the world by that date. Those railways will be closely linked to other forms of transportation so that passengers can, according to the plan, “get around a city within one hour, get around a city cluster within two hours, and make a trip between city clusters within three hours.”

Railways are expensive to build, Fang admits. For the new suburban lines under construction, the cost for each kilometer is about one billion yuan (or $150 million), and few of the high-speed lines in operation around the country are profitable. As the government keeps pouring money into its rail network, the question of how to make this expansion financially viable remains open.

It used to be a hassle for Ma Zhongwen, a university teacher in Guangzhou, to withdraw money from a special government-run savings account for housing every year. He had to make an online reservation, and then go to a bank and wait in line for hours. “I had to take time off work every time, because the bank only had one counter for the service, and the counter was only open during work hours,” he recalls.

These days, Ma gets it all done on his smartphone as one of the more than 1,600 public services now available under Yue Sheng Shi (“saving the trouble in Guangdong”), a piece of software designed by Guangdong’s provincial government and embedded in WeChat, China’s most popular smartphone app. Users can pay traffic tickets, renew a passport or visa, make appointments with government agencies, or apply for a business license. These services are jointly offered by two dozen municipal governments in the Pearl River Delta region. According to the Guangdong government, Yue Sheng Shi had more than 100 million registered users as of January 2021.

Similar apps are being developed and used across China as part of a new wave of digital infrastructure that the national government hopes will minimize paperwork and streamline the delivery of public services. Though it can be hard to break down administrative barriers, some experts argue that China’s largely top-down governance system could help in this regard. “City clusters is a good starting point to test out new forms of e-government in China,” says Zeng Gang, director of the Institute of Urban Development at East China Normal University in Shanghai.

Of course, the flip side of this arrangement is that big tech companies like Shenzhen-based Tencent, which makes WeChat, get access to huge amounts of user data. Turning a popular app into a wide-ranging public service platform has undeniably made people’s lives more convenient in some respects, but it’s also triggered concerns about data collection, surveillance, and privacy.

Cities are working together to monitor and clean up pollution.

As spring winds make gentle waves on the misty Lake Tai in Eastern China, blue-green algae bloom beneath the water. When the weather warms, these organisms quickly take over, giving the lake a greasy look and a foul smell. For more than a decade, algae blooms have disrupted fishing and tourism on the lake’s shorelines and threatened the water supply and health of tens of millions of people living in the lower Yangtze River Delta. In 2007, a particularly bad outbreak left the nearby city of Wuxi without drinking water for a week.

Several cities along the lake have made individual efforts to address algae blooms in the past, but now some of them are working together for the first time.

To help each other out, Wuxi, on the lake’s northern shore, and Huzhou, on its southern edge, have started sharing remote sensing data and using drones and automated boats to monitor the water’s surface together. The cities are affected at different times of the year—Wuxi in the summer and Huzhou in the fall—so the team in Huzhou will send a fleet of boats to assist colleagues in Wuxi when it gets hit, and Wuxi will return the favor.

The ultimate solution, however, is curbing and regulating pollution, says Qin Boqiang from the Nanjing Institute of Geography and Limnology at the Chinese Academy of Sciences.

When poorly treated wastewater from factories and farmlands flows into Tai, nutrients like nitrogen and phosphorus accumulate in the lake, and algae blooms flourish.

Qin hopes more collaboration among municipalities in the basin will motivate cities to establish common discharge standards, build modern sewage treatment facilities, explore cross-border law enforcement, and ultimately clean up Lake Tai once and for all.