Our solar system is full of comets that whizz by as we track them over centuries. But humans have so far seen only two visiting objects from outside the solar system. There’s ‘Oumuamua, the interstellar asteroid that we think might actually be a flat pancake-like rock originating from the remains of an exoplanet similar to Pluto. It’s so weird that people thought maybe it was an alien spacecraft. (It’s not.)

And then there’s 2I/Borisov, a comet that … has pretty much seemed like a run-of-the-mill comet. It was first discovered in August 2019 and made its way around the sun the following December. Between those months, most of the data pouring in suggested scientists were looking at a conventional object, made of pretty standard comet stuff (water ice, dust, gassy materials).

Maybe we just needed to be patient. A pair of new papers published today deliver some tantalizing insights into Borisov, including the finding that it may be one of the most undisturbed and pristine comets ever studied by humans. They also suggest that the conditions that gave rise to Borisov may not be so exotic after all. In fact, it might hail from a star system not too different from our own.

We’ve studied enough comets from our solar system to know that they formed during its early stages, when there was a ton of material swirling around and coalescing into individual bodies. They are made primarily from ice, but in order to survive, they have to form at a distance where the sun’s heat and radiation won’t instantly melt them. Other star systems presumably give rise to comets in the same way. The more distant they are from the star’s radiation, the more they retain their original composition and chemistry from their formation 4.5 billion years ago or so. This “pristine” quality means comets are like preserved time capsules of star systems in their infancies.

Comet dust in particular tells us what the solar system was made of when it first gave birth to comets, and the same principle can theoretically apply to interstellar comets. “Studying the composition and structure of dust particles in the dust coma of 2I/Borisov, we can make educated guesses about the formation conditions and locations of the dust,” says Bin Yang, an astronomer with the European Southern Observatory and the lead author of one of the studies. 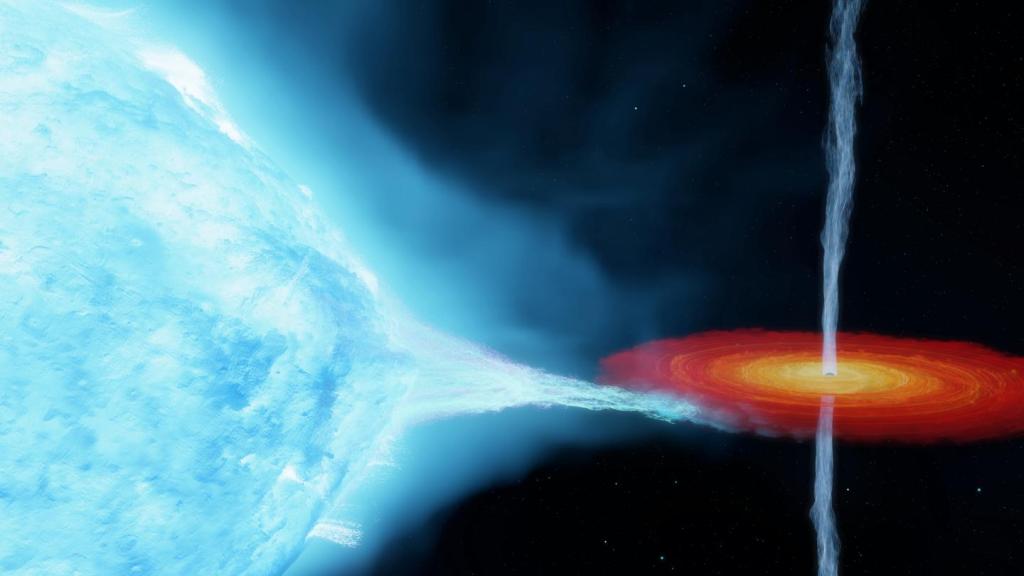 The first black hole ever discovered is more massive than we thought
Cygnus X-1’s black hole was first discovered more than half a century ago. But it continues to teach us new things.

The first study, led by Stefano Bagnulo at Armagh Observatory and Planetarium in the UK, focuses on reflected light. Light is composed of waves, and these waves normally oscillate in many different directions at once. When these waves are polarized, however, they oscillate in one specific direction. If light is polarized by a comet’s coma (the hazy outer shell of gas and dust expelled as the comet is heated by the sun), studying this light can give information on the size and composition of the dust, which helps us understand how the comet formed—and, by extension, provides a glimpse into the history of its original star system.

The new data, collected by the Very Large Telescope based in Chile, tells us that the light reflected from Borisov and filtered through its coma is more polarized than the light from any other object that we’ve studied in the solar system. This is a sign the coma’s particles are small and very fine, which suggests they have not been much disturbed by any star’s radiation and heat (forces that would otherwise cause larger chunks to be haphazardly ejected from the surface). The authors conclude that Borisov is perhaps one of the most pristine objects ever detected. The only object whose polarization comes close is C/Hale-Bopp, perhaps the brightest comet ever observed, and certainly one of the most widely studied comets of the 20th century. Hale-Bopp is thought to have come close to the sun only once before its most recent solar flyby in 1997. So the authors think similar conditions may have given rise to both Borisov and Hale-Bopp, in two different star systems.

Meanwhile, the team led by Yang had set out to understand how Borisov formed, using the VLT as well as Chile’s Atacama Large Millimeter/submillimeter Array (ALMA) to detect heat from large particles hanging in Borisov’s coma.

According to these observations, Borisov’s coma consists of compact, millimeter-size grains—pebbles that are unusually large for a comet. These pebbles, rich in carbon monoxide and water, probably formed first in the inner region of the star system, before being transported outward and gradually mixing with various ices formed at different locations farther from the star. This “gravitational stirring,” induced by giant planets, is thought to have happened in our own solar system (it’s even thought to have helped Hale-Bopp form). Borisov basically came together as an agglomeration of material from different parts of its star system, before finding a secluded place to call home far from its parent star.

Taken together, the findings help tell us a few things. An abundance of carbon monoxide and water in the dust suggests the comet has resided in low-temperature environments (i.e., far away from a star), where those compounds could have remained cold and stable, for nearly all its life. The finding of “pristine” characteristics bolsters this idea.

The similarities between Borisov and Hale-Bopp, along with evidence that both comets’ star systems experienced gravitational stirring, suggests that the evolution of our solar system is perhaps not as unique as we might have thought. That would also suggest the conditions that give rise to a habitable planet like Earth are more common in the galaxy than imagined.

Or perhaps this is a red herring, and Borisov’s home star system is actually very exotic. Neil Dello Russo, an astronomer at Johns Hopkins University who was not involved with the study, says he was surprised at how high the carbon monoxide and water values were—higher than anything observed in comets from our solar system.

Other questions linger as well. The new findings still cannot tell us exactly when the pebbles in the coma formed, or even what they’re made from.

The biggest problem might be that the two papers seem to promote two different ideas about the particles that make up Borisov: Yang’s paper prominently unpacks the discovery of large pebbles in the coma, while Bagnulo’s paper suggests the coma is dominated by smoke-like small grains that can cause extreme polarization of light. But Michael Kelley, a comet scientist at the University of Maryland who was not involved with the new studies, believes this is likely “just a consequence of the different techniques”—each favoring the detection of one specific type of particle. Future analyses should be able to compare and combine both sets of data and reconcile them as parts of Borisov’s evolution.

Borisov is a weird object, but what is truly weird is the notion that it might hail from a star system not too different from our own. This interstellar comet might be one of the most normal visitors we’ve ever said hello to.