The coronavirus has shattered many people’s lives, but most of us held on to one bit of optimism from the outset: the belief that we’d eventually invent a vaccine, that we would find a way to move beyond the pandemic. But it’s important to remember that, just like the vaccine, the belief in constant progress itself had to be invented. We can’t just presume it will continue.

Progress these days hinges on the interaction between larger incumbent companies and nimbler startups. The big, established companies focus more on improving efficiency and protecting their positions, while the smaller, fast-moving startups are more likely to provide the breakthrough inventions.

The problem is that over the past few decades the larger companies have, with the help of regulators, gotten better at edging out startups. The pandemic has in some ways worsened this trend. It is even harder for many cash-strapped young firms to survive. And that doesn’t portend well for innovation.

One recent study from researchers at the University of Chicago and Northwestern University shows that breakthrough inventions are more likely to come from individual inventors or smaller teams. Corporations excel at bringing about incremental improvements, like those that make the production process more efficient. But major leaps in technology tend to come from newer, smaller firms. You can make a better horse carriage, but eventually it takes a radical innovation to make a motorcar—otherwise progress stalls.

Covid-19 has caused more churn of companies entering and exiting the marketplace than any other event since World War II, but we can’t read that to mean we’ll see a faster rate of technological progress. Instead, we’ve seen the opposite: restrictions on immigration, plummeting travel, and the isolation of knowledge workers in home offices have made the kinds of interactions that drive innovation less likely to happen.

A bias toward profit

Besides this, there’s evidence that venture capitalists have devoted more of their energies to guiding companies already in their portfolios through the pandemic, rather than looking outward for new investments. As a result, the prime beneficiaries from the pandemic have been incumbents with deep pockets. Giants like Apple, Alphabet, Amazon, Facebook, and Microsoft collectively hold more than $570 billion in gross cash. 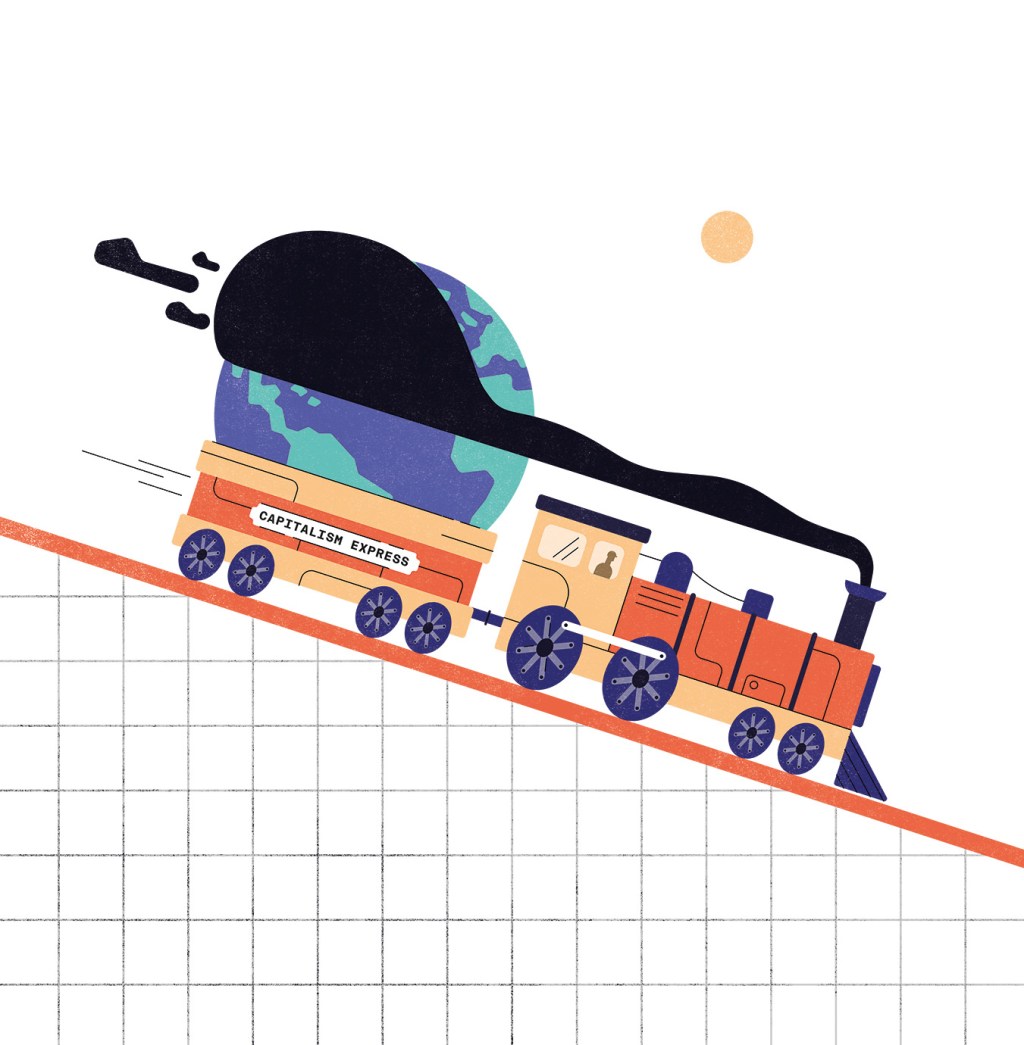 Capitalism is in crisis. To save it, we need to rethink economic growth.
The failure of capitalism to solve our biggest problems is prompting many to question one of its basic precepts.

As covid-19 solidifies the market position of behemoths, it also increases their political clout, which tends to stifle the kind of dynamic environment in which nimble startups take risks and create bold new innovations.

The British historian Eric Hobsbawm once wrote, “It is often assumed that an economy of private enterprise has an automatic bias towards innovation, but this is not so. It has a bias only towards profit.” He was right.

In the early stages of a product’s life cycle, a company will focus on innovation. But once a prototype has been established, that company’s efforts shift toward incremental improvements in production to cut costs. At a certain point a company finds that it’s more cost-efficient to focus on political lobbying to protect itself from competition than to spend money on innovating. And that’s ultimately terrible for the state of progress: research from the National Bureau of Economic Research shows that companies with more political connections tend to be less innovative and apply for fewer patents.

The economy had been trending in this direction since before the pandemic. The French economist Thomas Philippon has documented how business dynamism has declined dramatically in the US since the 2000s, while business spending on lobbying has skyrocketed. In a separate study, Philippon and Germán Gutiérrez show that recent regulations “have a negative impact on small firms, especially in industries with high lobbying expenditures.” In other words, powerful firms encourage regulations that hinder the competition and boost their own profits. This is a path toward stagnation, not progress.

One way of halting this economic equivalent of atherosclerosis is to encourage more free trade and global competition. But thanks in part to covid-19, we’re moving in the opposite direction. As the pandemic took off in the first 10 months of 2020, G20 members undertook 1,371 policy interventions, of which 1,067 harmed trading partners, according to a recent report by the Centre for Economic Policy Research.

Should we worry that we’re slowing the speed of progress? Absolutely. To take the most immediate example, without progress we would have no vaccines—nor would we be capable of mass-producing them. What’s more, innovation is a prerequisite for sustained growth, and an economy that isn’t growing becomes a zero-sum game. When growth is static and resources are limited, that leads to greater competition for those resources, which helps explain why violence was more pervasive before modern growth began, as Steven Pinker has shown.

Much has been written about the political power of the top 1% in the US, but the vast majority of campaign contributions come from business lobbying groups rather than wealthy individuals. If innovation has been stifled and people somehow sense that democracy is rigged, the solutions might have less to do with restraining the billionaires and more with reining in the corporate behemoths.