On January 28, a physician at a hospital in the southern Indian city of Hyderabad received an SMS with the date and time for his first shot of a covid-19 vaccine. He’d been toiling away in the covid ward, where he’d watched many breathe their last since April, and the vaccine was the one thing he was looking forward to.

But he wasn’t thrilled when he read the message: it wasn’t addressed to him. It was like receiving a winning ticket with someone else’s name on it.

“I was confused,” says the doctor, who requested anonymity because his employer will not allow him to speak to the media. Worried, he rushed to his hospital, unsure whether he was really being summoned to get the vaccine or not. It turned out to be a software glitch, and his name wasn’t being called after all.

India, which has had the second-highest number of covid-19 cases in the world, has launched one of Asia’s most ambitious vaccination drives, aiming to inoculate 300 million people by August. To make it happen, the government is using a vaccine management system called Co-WIN. For now, the focus is on getting 30 million health-care and frontline workers vaccinated. 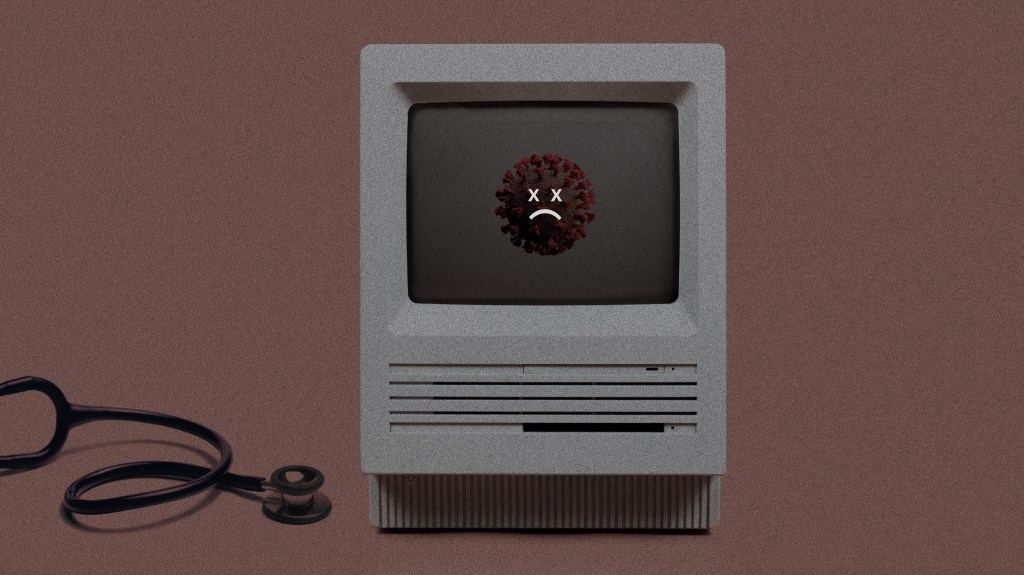 These workers will receive one of two vaccines approved for emergency use: the AstraZeneca-Oxford vaccine—known locally as Covishield and being manufactured by the Serum Institute of India—and Bharat Biotech’s indigenous vaccine, called Covaxin.

Co-WIN is the backbone of the vaccination drive, so to speak. It handles registrations, creates vaccination schedules, informs the recipients through text messages, sends people to the right vaccination center, and also creates a vaccination certificate after they’ve received two doses. Although it’s starting with health-care workers, it’s expected to be used for the general public, too, and people will be asked to self-register through the app.

But owing to multiple technical glitches of different kinds, the number of people being vaccinated in India is already significantly lower than was hoped. Several Indian states have not been able to meet their vaccination targets, delaying the overall drive.

These malfunctions have pushed vaccinators to switch to simpler methods of managing distribution. For instance, at the All India Institute of Medical Sciences (AIIMS) in Delhi, doctors were missing messages about getting their vaccine because of software issues. The hospital’s workaround: get in line. It said doctors could visit the vaccine site, and if their name was registered and a dose was available, they could get the shot.

“Every day there is learning with the app and how to roll out in a more efficient way,” says Randeep Guleria, director of AIIMS and one of the first Indians to have been inoculated. He’s one of the foremost doctors in India, and his shot was televised in an effort to win people’s trust.

India’s difficulties aren’t unique—other countries are experiencing trouble distributing covid vaccines, including the US. China also seems to be falling behind on its internal target of inoculating 50 million people by February 11.But a glitchy rollout for India’s health-care professionals and frontline workers could indicate that the country isn’t prepared for the much larger task ahead.

As of February 8, almost 6 million people had been given the first dose, a rate of around 250,000 per day. To meet the ambitious target of 300 million doses by August, India will have to administer more than five times that number: 1.4 million doses each day. Speed is critical, because these vaccines need to be administered within the approved shelf life of six months. AIIMS is looking at setting up more vaccination centers to make up for lost time.

Of all the major countries to roll out vaccines, India could have planned the smoothest, most time-tested process, because the behemoth task of mass vaccination isn’t something new. Each year, the government administers vaccines against polio and measles to 55 million infants and pregnant women by visiting each home and making a list of who needs the shots. Using a technological solution like Co-WIN is a departure from the norm, and it’s meant to be an upgrade. The government has told the press that Co-WIN will make real-time vaccine-related data available to officials monitoring the rollout, and that the app will make it harder for people to use proxies. It’s also an attempt to keep doses from going to waste.

But experts suggest that India may need to fall back on the old, proven methods if it wants to administer 600 million doses of covid-19 vaccine in less than seven months.

Giridhar Babu, an epidemiologist and part of the Covid-19 Technical Task Force in India, believes that reaching the country’s goals will require creating a comprehensive list of people to be vaccinated—the method used in previous campaigns. “As of now, health workers and frontline workers [are being vaccinated]: these are the easiest ones to capture,” says Babu. “But once we start going beyond this to the population, there is not a single list which has people with all the comorbidities, elderly people, their [medical] history.”

He says that list should be created by officials going door to door and signing people up. Babu believes that self-registration through Co-WIN may only work for the urban and educated and not for people in rural areas, and that “incomplete registration will then lead to incomplete vaccination.” He acknowledges, though, that making a list of people to be vaccinated “is a phenomenally large exercise which requires a lot of planning.”

“It’s dangerous to have it just on an app”

Experts worry not only that the drive will fall short of its targets, but that it will be used as a way to gather citizens’ private health data. In August, Prime Minister Narendra Modi announced the launch of a national health ID—a way to centralize the health-care data of Indians. Later the health ministry said that citizens being inoculated would have the option to create a unique health ID through their Aadhaar number—India’s controversial 12-digit national ID, which is linked to people’s fingerprints and iris scans.

“When a beneficiary shares their Aadhaar details at the vaccine center for the purpose of ID verification, the Aadhaar data gets shared with Co-WIN at the back end, which is then being used to create a health ID of that person,” says Srikanth Lakshmanan, a tech researcher who has been studying the documents around Co-WIN. “While the government says it’s voluntary, not many people even know that it’s being created.”

There are privacy concerns, too. The Co-WIN app, which for now has over 100,000 downloads in Google’s Play Store, does not have a proper privacy policy, and there is no data protection law that would appropriately cover this data. Lakshmanan says, “My bigger concern is that while the government is building the digital health infrastructure for sharing health data with the insurance and pharma industry, there isn’t investment by the government in expanding the real health infrastructure we need.”

Digital policy experts say using an app for the vaccination drive reflects India’s love of techno-solutionism but is fraught with potential difficulties. “It’s not easy to make an app-only solution when the infrastructure is not good—people not only need mobile phones, they need connectivity, internet, they need to be able to use the phone,” says Shweta Mohandas, a policy officer at the Centre for Internet and Society, a think tank. “Especially with regard to medical services, it’s dangerous to have it just on an app ... it limits the number of people who can use it.”

Meanwhile, the doctor who received the misaddressed vaccine invitation was able to get the first dose when he showed up at the hospital to inquire about it. He feels thankful, he says, because if it hadn’t been for that SMS addressed to a stranger, he wouldn’t have gotten the vaccine so soon.

But the Co-WIN snags continued.

Days after he got the first shot, he received two more text messages addressed to two other people, with details of the time and location for their first doses. “I wonder,” he said, “if those people have gotten this message or missed their first dose.”