President-elect Joe Biden won the US election in part by running on an ambitious climate platform promising to invest heavily to avert climate catastrophe while creating millions of well-paying jobs. But the question of how Biden’s proposed nearly $2 trillion in green investment will get spent, and what other measures the government will take to put the green economy on the fast track, is still up for debate.

Some politicians are now championing industrial policy as the way forward. Under industrial policy, the government makes investments that the private sector is unwilling or unable to make, and which will help the country achieve certain socially desirable goals. In short, industrial policy is a form of government planning to create or support strategic industries. It was most prominent during WWII and again in the early 1980s, and today has become a central pillar of the Green New Deal.

Central to the debate has been the role of the government in bearing and hedging risk through programs such as loan guarantees, a new public bank, and direct support from the Federal Reserve to maintain low interest rates to ease the transition.

However, critics invariably bring up “the Solyndra mess,” an instance in 2011 when a California-based solar manufacturer defaulted on a $535 million federal loan guaranteed by the Obama Administration as part of its stimulus efforts. The failure of the clean energy company gave rise to a “backlash against federal support for energy projects.”

It’s true, the US government backed a loser. Does this mean the government should stay away from industrial policy, and instead allow the invisible hand of the market, through private equity and banks, to pick winners and losers?

No. In fact, we need more Solyndras.

Policymakers are scrambling to find the right mix of tools to put the country on the path to a green economy. The price of inaction is astronomical. Over a billion people could be displaced by climate change. Entire cities and nations would fall. Conflicts would intensify.

Taking action, however, requires us to substantially alter the economy. To avert catastrophic levels of warming, we have to make “far-reaching and unprecedented changes in all aspects of society,” according to the Intergovernmental Panel on Climate Change. This means investing in rooftop solar and large clean-energy projects on a massive scale, decarbonizing buildings from coast to coast, overhauling the transportation system, and supporting startups and infant industries that will develop brand new technologies to ease the transition.

President Donald Trump’s disdain for active environmental policy drove many short-sighted developments of the past four years, including the US’s withdrawal from the Paris Agreement, his termination of Obama’s Clean Power Plan, and his rollback of environmental protections. And as Trump has made his antipathy for government support of clean industries well known, his administration has wielded government power to prop up the fledgling oil and gas industries with bailouts while opening new lands for fossil fuel extraction.

Biden, by contrast, has made climate change one of four priorities in his “Build Back Better” transition documents. In the ambitious plan, the new administration commits to revitalizing infrastructure, improving public transit, installing electrical charging stations, strengthening fuel efficiency mandates for automakers, and supporting research into new battery technology. In short, it screams of industrial policy.

Estimates as to how much investment is actually needed to build the carbon neutral economy range from 2 to 5% of GDP per year; that’s about $400 billion to $1 trillion annually for the next 10 years. Thus, Biden’s proposed $2 trillion will only be the down payment. These investments will require significant up-front public funds even as the economy continues to struggle well below full capacity. While these investments could create millions of jobs in the immediate future, a portion of the payoff would be spread over a long period. There will be more jobs and cleaner air today, and a more livable climate for centuries to come.

Not all funding for the green transition must come from the government, of course—the private sector has a big role to play. However, companies have systematically underinvested in green energy and technology relative to the amount that would be required to meet the goals of the Paris Agreement. That’s primarily because of the sizable spending required, the public nature of many of the benefits, and the potential uncertainty of such investments.

Green tech firms struggle to find financing for their ideas, which is a major barrier to tackling our growing climate problem. The finance industry, which in many respects serves as the nation’s economic planners, hasn’t shown up. Why? Finance likes to channel funds into projects with relatively low risks and high, fast private payoffs. But green investments provide the bulk of their benefits to the public and to future generations.

Venture capitalists are more accustomed to funding high-risk companies, but work hard to protect their share of future profits. Climate mitigation requires an inverse approach: the unicorns of climate innovation will generate incalculable benefit for the common good, rather than for a few investors.

America has been here before. The government has repeatedly used industrial policy to spur innovation and direct economic transformation, especially in times of peril. In fact, Alexander Hamilton made the case that the US government should guide investments in the name of the “general welfare.” Hamilton believed the economy needed government to be the guiding hand of the market, and at times to create new markets from the ground up.

Mobilizing the country for WWII is perhaps the most telling example of this approach, and one often referred to by climate advocates. As FDR called for the “arsenal of democracy” to be activated, the government used industrial policy—loan guarantees, subsidies, and procurement policy—to rapidly scale up wartime industries and create new markets.

The US government hasn’t deployed this approach only during times of crisis, though. It has continuously funded programs and agencies such as the National Institutes of Health, the National Science Foundation, the Small Business Innovation Research program, and the Defense Advanced Research Projects Agency. DARPA in particular has led to huge technological breakthroughs including the internet, GPS, cloud computing, and artificial intelligence.

More recently, we can look to the Advanced Research Projects Agency–Energy (ARPA-E), and green programs incorporated in the 2009 American Recovery and Reinvestment Act. In fact, it was a renewable-energy loan guarantee program included in that stimulus bill that financed the high-profile “failure” of Solyndra.

While Solyndra’s downfall received a lot of spilled ink in the media, Solyndra was actually one of only two failures. The other 22 companies repaid their loans, resulting in a profitable program overall that helped accelerate multiple green industries in the US. And one recipient is now a wildly successful electric automaker: Tesla.

The process of industrial development takes time. Winners, like Tesla, and losers, like Solyndra, inevitably emerge. In the early stages of any industry’s development, firms with good ideas and good products may fail for a host of reasons.

We know the economic and environmental costs of continuing to burn fossil fuels will be devastating. Federal support for green technology can help the industry past the hurdles of early market failures and the speedbumps that inevitably come with introducing new products and ways of doing things.

Solyndra ultimately failed because of global industrial changes that few could have foreseen. Solyndra aimed to produce solar panels without silicon. But technology, driven by industrial policies abroad, led to a subsequent boom in the global production of silicon, which lowered the cost of panels produced by Solyndra’s competitors. At the same time, the Chinese government began subsidizing solar production by Chinese firms, which were able to sell panels at lower prices than US firms could.

The failure of one firm, due largely to changes outside of its control, while more than 20 others succeeded under the same program, is precisely the mark of a successful industrial policy. The federal program that supported Solyndra took chances and funded projects at scales that the finance industry and venture capitalists were simply unable or unwilling to. In the end, these bets overwhelmingly paid off, providing a vital boost to the domestic solar, wind, and EV industries.

Over the past 40 years, solar panel prices have fallen by roughly 99%. How can that be? Well-crafted public policies. Even after Solyndra’s failure, sustained public investments in solar R&D built the industry into a robust alternative to fossil fuels. And tax credits helped lower the cost of producing and installing them as the industry developed. Industrial policies in China, in particular, funded solar energy research and supported manufacturers as they scaled up. 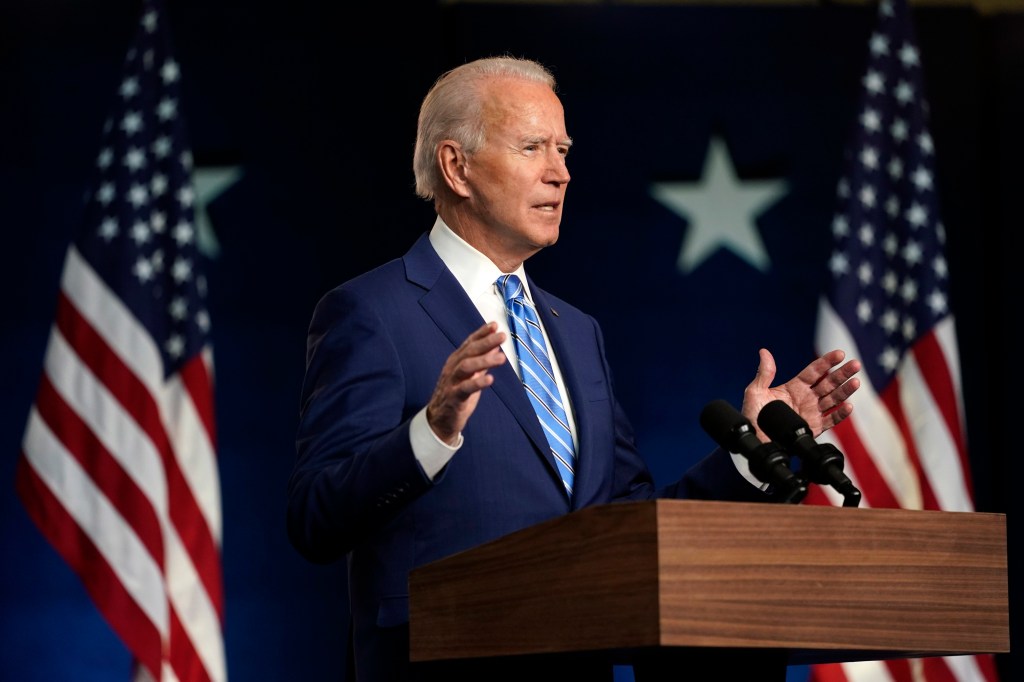 What Biden will and won't be able to achieve on climate change
Passing aggressive climate laws will be highly difficult without Democratic control of the Senate. But there are other ways to make progress.

Today, wind turbine technicians and solar panel installers represent the first and third fastest-growing occupations in the country. Both pay well above the median wage earned across the US.

Such examples show that when the government leads, the private sector will follow. Smart industrial policy that channels national resources toward scaling green investments and supporting research and development in hard to abate sectors, such as heavy industry, where we do not have all the climate solutions, will fill the gap left by private institutions’ unwillingness to fund the green economy we desperately need.

It’s time to come to terms with an uncomfortable fact: Solyndra was part of a successful program. If no government-backed firms failed, it’d be a clear sign that the government was being too conservative. These investments include risk and benefits that don’t necessarily align perfectly with industry titans. That’s precisely why it’s the government’s job to step in and correct these market failures.

Bold industrial policy is a critical component of any successful crash decarbonization program. It will require both scaling up existing programs and deploying new ones to invest in and lend directly to green companies. Such a program would guarantee green loans and facilitate private lending for initiatives that would improve environmental and industrial development. It would also put equity and an increasing share of public ownership at the center.

That might mean, for example, expanding ARPA-E’s mandate to cover sectors such as agriculture, industry, and heavy-transport while increasing funding by 50 to 100 times today’s levels; creating a new green bank to direct credit toward decarbonization efforts; building green social housing; and directly purchasing green products from new firms and industries through government procurement policy.

Given the divided Congress that President-elect Biden is likely to face, these are daunting challenges. But there is still a great deal Biden could get done without legislation, especially by appointing climate champions to key agencies including the Federal Reserve, Office of Management and Budget, and Treasury.

For far too long, finance has fueled inequality and planetary destruction. It’s time to harness finance and direct it to preserve our planet.