Rolando Chang Barrero lives in Palm Beach County, Florida, in what he calls a bipartisan Hispanic neighborhood. He’s an artist and gallery owner who is well known in his community, and he is president of the county’s Democratic Hispanic Caucus. But this election season, he says, neighbors of all political persuasions have been coming to him for fact checks about the upcoming vote.

“They will call me and come by the house and say ‘Is this true?’ and I will explain the nuance,” he says. “There is just such a bombardment of opposing views that it confuses people.”

In fact, he says, the 2020 election has seen more confusing messages aimed at his neighbors than he can recall: it “has been really really bad with fake calls, fake texts, manipulated things.”

This might be the first election in which the Hispanic voting block will represent the largest group of minority voters, with 32 million eligible citizens. Many of the states with the largest Hispanic populations are considered battlegrounds—including New Mexico, Texas, Arizona, Florida, and Nevada—and in other close states such as North Carolina and Pennsylvania, Hispanic votes could provide a “critical boost” to tight races. An analysis by Equis Research showed that Hispanic voters could be the pivotal vote in five states hinging on tiny margins, and that Hispanic voters in a small number of swing counties could determine the entire outcome of the election.

With so much at stake, money and information are being poured into those communities to try to sway the vote. This is especially true on social media, where an array of sophisticated microtargeted messages are focused on changing the minds of Hispanic voters—or persuading them not to vote at all.

Disinformation about religion is particularly rife, driven by the fact that 77% percent of Hispanic voters are Christian, and 48% of them are Catholic. Abortion, in particular, is the focus of large amounts of online propaganda.

Within hours of President Trump’s announcing his intention to nominate Amy Coney Barrett to the Supreme Court, messages about her stance on this issue started appearing across Spanish-speaking WhatsApp group chats. Most of the messages were an attempt to appeal to Catholic Hispanics, but some distorted her record. 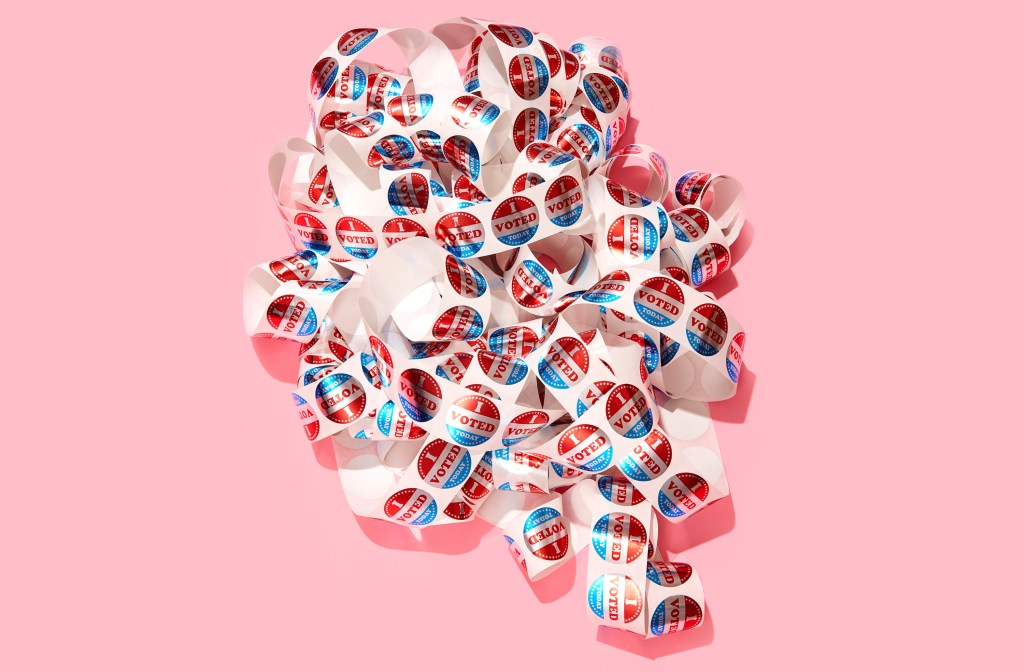 Explainer: What do political databases know about you?
If you live in the US, you’re almost certainly being tracked by political organizations. They know a lot about you—but some data is just guesswork.

The disinformation is “using religion as a pull to distort her record, drawing a real divisiveness between what it means to be, as you would call it, a good Christian or a good Catholic,” says Ashley Bryant of Pa’lante, an effort to combat this type of targeting.

Soon progressive groups were trying to combat the narrative, arguing that Barrett’s nomination would be bad for Catholic Hispanics.

More recently comments by Joe Biden about making abortion the “law of the land” triggered a siege of coordinated disinformation across a number of Spanish-language Facebook pages. Repetitive imagery and messaging on the subject are appearing across these groups, such as the false claim that Kamala Harris supports abortion up to minutes before birth. These smaller-scale coordinated actions can avoid the attention and scrutiny that might be given to viral posts or hashtags, making them harder to monitor and catch.

Vulnerabilities of the Hispanic vote

Communities where Spanish is the dominant language are particularly vulnerable to a unique set of challenges related to misinformation and disinformation, according to Jacobo Licona, a researcher at Equis Labs. He says that while there may be more disinformation in English-speaking Hispanic digital spaces, there is also better monitoring.

“Spanish-language content is oftentimes a little bit more concerning just because there's less accountability,” he says. While Facebook will sometimes flag this false content in English, the same material in Spanish won’t always get flagged. “They often co-opt [disinformation] and spread it quickly in Spanish. And that oftentimes goes unchecked compared to some of the English-language content,” he says.

Nefarious actors have been using social media, radio, and local Spanish-language newspapers to inundate voters with unprecedented levels of disinformation and conspiracy theories. Some Hispanic influencers have also been key spreaders of such content this year, especially with lies about mail-in-voting fraud.

WhatsApp group chats are particularly popular among immigrant communities because the app doesn’t require a US phone number and offers end-to-end encryption that provides some security. But WhatsApp is hard to monitor and fact-check, making it nearly impossible for researchers and activists to monitor disinformation and bad actors. (WhatsApp’s owner, Facebook, has put limits on message forwarding to try to reduce the spread of dangerous information in countries such as Brazil and India.)

Similarly, researchers believe that the service is an incubator for disinformation that spreads organically in private groups of trusted family and friends. A recent report by Politico highlighted how a Republican-moderated WhatsApp group meant to inform Hispanic communities on covid-19 included a post claiming, “Real Catholics can’t be Democrats.”

In Florida, where Barrero lives and the population is more than 26% Hispanic, citizens are used to being inundated with ads. It’s a critical swing state, and a regular battleground for both parties.

But things have escalated this year: the presidential campaigns have already outspent 2016’s advertising budgets by $100 million. In particular, there has been a focus on messaging in both English and Spanish to Hispanic Americans about health care, abortion, and immigration. The audience in Florida includes a mix of Cubans, Venezuelans, Mexicans, Haitians, and others, making the Hispanic vote more diverse and contested than the national Hispanic vote, which leans left. The Trump campaign has some support from conservative Cuban-Americans, as well as from Catholic and male Hispanic voters.

In places like Miami-Dade County, one of the most contested and politically expensive districts in the country, Cuban-Americans are being targeted directly by both Trump and Biden. The Trump campaign is feasting on genuine fears of communist rule and attempting to paint Biden as a socialist: a Trump ad campaign called “Progresista” compared some of Biden’s language to that of Hugo Chavez, Fidel Castro, Gustavo Petro, and Nicolas Maduro, with a final screen that displays “Biden = Socialism.” The press release for the advertisement called Biden “anti-Hispanic.”

Meanwhile, Facebook groups for Cuban-Americans have been a hotbed of disinformation and propaganda. Last week, Pa’lante was following a post in the group “Cubanos por Donald Trump” in which Biden was photographed on a trip to the Little Haiti Cultural Center in Miami. The caption “Who wants a Commander in Chief that kneels before foreign leaders?” implied that Biden was capitulating to the Haitian government, even though the people in the photograph were simply Miami locals dressed in traditional Haitian attire. The same post has been shared in a number of Hispanic groups on Facebook by the same unverified user, urging them to “vote red and in person.”

Leftist causes, meanwhile, have compared Trump to some of the same dictatorial figures. Priorities USA, the largest Democratic superPAC, ran an ad campaign in Florida likening him to Latin American “caudillos,” or anti-democratic authoritarian strongmen.

But it’s the right wing where the influence of bots and misinformation is most visible.

In the middle of July, Robert Unanue, the CEO of Goya Foods, spoke glowingly of President Trump at the White House. Prominent liberal politicians like Alexandria Ocasio-Cortez subsequently supported calls for a boycott of Goya products, only to be met by a blowback from Republicans like Ted Cruz, who claimed that “the Left is trying to cancel Hispanic culture.”

One bot tracked by Pa’lante commented about Goya 6,700 times on Facebook. The bot constantly changed its position and language in an effort to create outrage in different communities and then turn attention to Trump’s Hispanic Prosperity Initiative.

Some coordinated actors will also spread the same message repeatedly in many different groups, creating a more complex challenge than single viral posts, says Licona: “Oftentimes you’ll see posts with an identical caption and an identical story shared by multiple pages at the same time, which gives it an algorithmic boost and more reach. A post that gets thousands of shares is impactful, but what is more problematic and dangerous is that some of these pages are coordinating with each other to reach more feeds and people.”

Combating the problem is challenging. Pa’Lante employs a network of local watchdog groups plugged into the communities it monitors, and creates accurate content that is meant to drown out mis- and disinformation. It’s a fairly effective short-term remedy, though it does nothing to fix the problem structurally or even quickly. In the three short weeks until Election Day, Pa’Lante is expecting a steady deluge of messages that shift away from persuasion and move into intentional suppression by spreading messages meant to confuse and intimidate voters.

The coordinated messaging around mail-in-voting fraud is an example. Licona is already seeing these messages directed to the Hispanic community, and cautions that while there is legitimate confusion, there is a clear intention to create distrust of both political parties and of the system in general in order to depress voter turnout.

Lies about mail-in voting are a form of active suppression, says Bryant.

It’s “a domestic tactic that is just another way of weaponizing digital media against Latinx voters,” she says. “It truly is a voter suppression tactic, but also just simply a threat to our democracy, really being able to suppress the access of marginalized communities to the education that they need to be informed and make informed decisions and be civic participators.”

Correction: An earlier version of this story had attributed the graph of Goya mentions to one bot on Twitter. It has been updated to show that the graph reflects all mentions of Goya across social-media networks by bots and humans.