Should Twitter censor lies tweeted by the US president? Should YouTube take down covid-19 misinformation? Should Facebook do more against hate speech? Such questions, which crop up daily in media coverage, can make it seem as if the main technologically driven risk to democracies is the curation of content by social-media companies. Yet these controversies are merely symptoms of a larger threat: the depth of privatized power over the digital world.

Every democratic country in the world faces the same challenge, but none can defuse it alone. We need a global democratic alliance to set norms, rules, and guidelines for technology companies and to agree on protocols for cross-border digital activities including election interference, cyberwar, and online trade. Citizens are better represented when a coalition of their governments—rather than a handful of corporate executives—define the terms of governance, and when checks, balances, and oversight mechanisms are in place.

There’s a long list of ways in which technology companies govern our lives without much regulation. In areas from building critical infrastructure and defending it—or even producing offensive cyber tools—to designing artificial intelligence systems and government databases, decisions made in the interests of business set norms and standards for billions of people.

Increasingly, companies take over state roles or develop products that affect fundamental rights. For example, facial recognition systems that were never properly regulated before being developed and deployed are now so widely used as to rob people of their privacy. Similarly, companies systematically scoop up private data, often without consent—an industry norm that regulators have been slow to address. 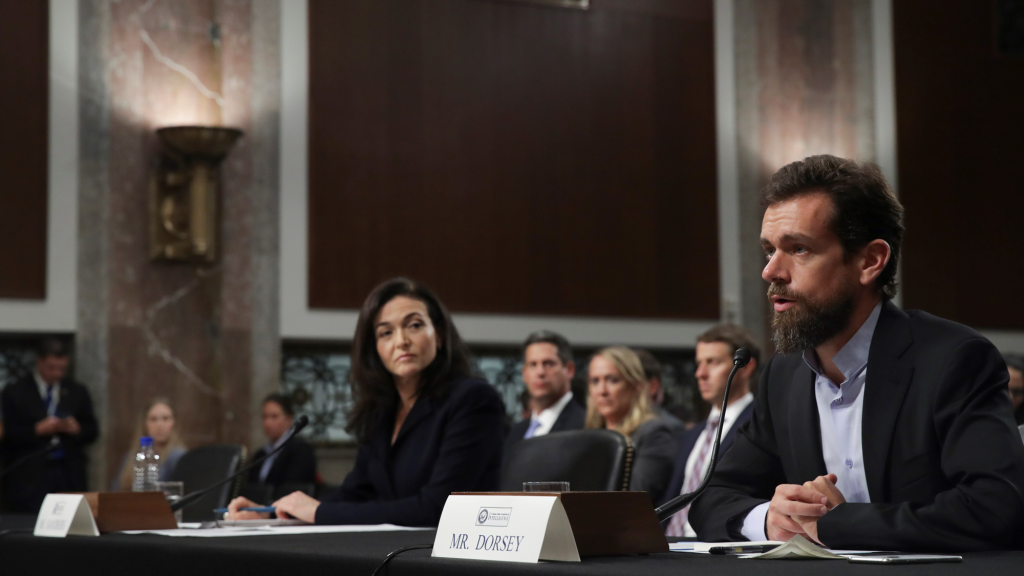 Why Congress should look at Twitter and Facebook
If America’s politicians really care about the damage online platforms can do, they should look at online conspiracy theories—and how they’re made worse by the design of social media sites.

Since technologies evolve faster than laws, discrepancies between private agency and public oversight are growing. Take, for example, “smart city” companies, which promise that local governments will be able to ease congestion by monitoring cars in real time and adjusting the timing of traffic lights. Unlike, say, a road built by a construction company, this digital infrastructure is not necessarily in the public domain. The companies that build it acquire insights and value that may not flow back to the public.

This disparity between the public and private sectors is spiraling out of control. There’s an information gap, a talent gap, and a compute gap. Together, these add up to a power and accountability gap. An entire layer of control of our daily lives thus exists without democratic legitimacy and with little oversight.

Why should we care? Because decisions that companies make about digital systems may not adhere to essential democratic principles such as freedom of choice, fair competition, nondiscrimination, justice, and accountability. Unintended consequences of technological processes, wrong decisions, or business-driven designs could create serious risks for public safety and national security. And power that is not subject to systematic checks and balances is at odds with the founding principles of most democracies.

Today, technology regulation is often characterized as a three-way contest between the state-led systems in China and Russia, the market-driven one in the United States, and a values-based vision in Europe. The reality, however, is that there are only two dominant systems of technology governance: the privatized one described above, which applies in the entire democratic world, and an authoritarian one.

Does that mean democratic governments should build their own social-media platforms, data centers, and mobile phones instead? No. But they do need to urgently reclaim their role in creating rules and restrictions that uphold democracy’s core principles in the technology sphere. Up to now, these governments have slowly begun to do that with laws at the national level or, in Europe’s case, at the regional level. But to bring globe-spanning technology firms to heel, we need something new: a global alliance that puts democracy first.

Global institutions born in the aftermath of World War II, like the United Nations, the World Trade Organization, and the North Atlantic Treaty Organization, created a rules-based international order. But they fail to take the digital world fully into account in their mandates and agendas, even if many are finally starting to focus on digital cooperation, e-commerce, and cybersecurity. And while digital trade (which requires its own regulations, such as rules for e-commerce and criteria for the exchange of data) is of growing importance, WTO members have not agreed on global rules covering services for smart manufacturing, digital supply chains, and other digitally enabled transactions.

What we need now, therefore, is a large democratic coalition that can offer a meaningful alternative to the two existing models of technology governance, the privatized and the authoritarian. It should be a global coalition, welcoming countries that meet democratic criteria.

The Community of Democracies, a coalition of states that was created in 2000 to advance democracy but never had much impact, could be revamped and upgraded to include an ambitious mandate for the governance of technology. Alternatively, a “D7” or “D20” could be established—a coalition akin to the G7 or G20 but composed of the largest democracies in the world.

Such a group would agree on regulations and standards for technology in line with core democratic principles. Then each member country would implement them in its own way, much as EU member states do today with EU directives.

What problems would such a coalition resolve? The coalition might, for instance, adopt a shared definition of freedom of expression for social-media companies to follow. Perhaps that definition would be similar to the broadly shared European approach, where expression is free but there are clear exceptions for hate speech and incitements to violence.

Or the coalition might limit the practice of microtargeting political ads on social media: it could, for example, forbid companies from allowing advertisers to tailor and target ads on the basis of someone’s religion, ethnicity, sexual orientation, or collected personal data. At the very least, the coalition could advocate for more transparency about microtargeting to create more informed debate about which data collection practices ought to be off limits.

The democratic coalition could also adopt standards and methods of oversight for the digital operations of elections and campaigns. This might mean agreeing on security requirements for voting machines, plus anonymity standards, stress tests, and verification methods such as requiring a paper backup for every vote. And the entire coalition could agree to impose sanctions on any country or non-state actor that interferes with an election or referendum in any of the member states. 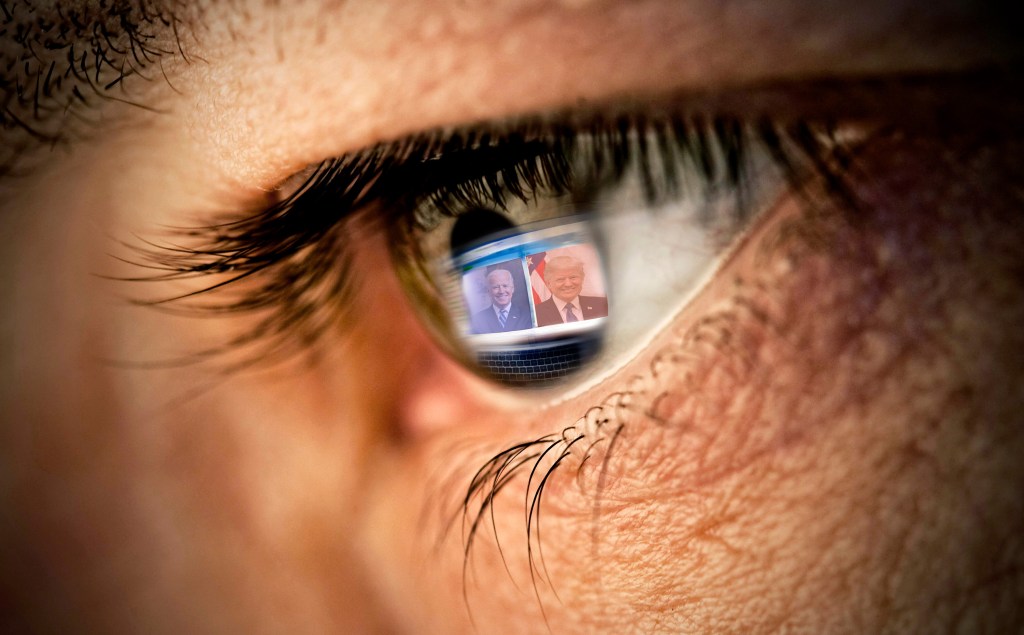 Why Facebook’s political-ad ban is taking on the wrong problem
A moratorium on new political ads just before election day tackles one kind of challenge caused by social media. It’s just not the one that matters.

Another task the coalition might take on is developing trade rules for the digital economy. For example, members could agree never to demand that companies hand over the source code of software to state authorities, as China does. They could also agree to adopt common data protection rules for cross-border transactions. Such moves would allow a sort of digital free-trade zone to develop across like-minded nations.

China already has something similar to this in the form of eWTP, a trade platform that allows global tariff-free trade for transactions under a million dollars. But eWTP, which was started by e-commerce giant Alibaba, is run by private-sector companies based in China. The Chinese government is known to have access to data through private companies. Without a public, rules-based alternative, eWTP could become the de facto global platform for digital trade, with no democratic mandate or oversight.

Another matter this coalition could address would be the security of supply chains for devices like phones and laptops. Many countries have banned smartphones and telecom equipment from Huawei because of fears that the company’s technology may have built-in vulnerabilities or backdoors that the Chinese government could exploit. Proactively developing joint standards to protect the integrity of supply chains and products would create a level playing field between the coalition’s members and build trust in companies that agree to abide by them.

The next area that may be worthy of the coalition’s attention is cyberwar and hybrid conflict (where digital and physical aggression are combined). Over the past decade, a growing number of countries have identified hybrid conflict as a national security threat. Any nation with highly skilled cyber operations can wreak havoc on countries that fail to invest in defenses against them. Meanwhile, cyberattacks by non-state actors have shifted the balance of power between states.

Right now, though, there are no international criteria that define when a cyberattack counts as an act of war. This encourages bad actors to strike with many small blows. In addition to their immediate economic or (geo)political effect, such attacks erode trust that justice will be served.

A democratic coalition could work on closing this accountability gap and initiate an independent tribunal to investigate such attacks, perhaps similar to the Hague’s Permanent Court of Arbitration, which rules on international disputes. Leaders of the democratic alliance could then decide, on the basis of the tribunal’s rulings, whether economic and political sanctions should follow.

These are just some of the ways in which a global democratic coalition could advance rules that are sorely lacking in the digital sphere. Coalition standards could effectively become global ones if its members represent a good portion of the world’s population. The EU’s General Data Protection Regulation provides an example of how this could work. Although GDPR applies only to Europe, global technology firms must follow its rules for their European users, and this makes it harder to object as other jurisdictions adopt similar laws. Similarly, non-members of the democratic coalition could end up following many of its rules in order to enjoy the benefits.

An alarming report outlines an extensive pattern of racial discrimination within the city’s police department.