On Sunday evening, Jacob Blake was shot in the back by police in Kenosha, Wisconsin. By Tuesday, a 16-year-old Texan, Kel, had built a one-page website, Justice for Jacob Blake, that offered context, templates for contacting officials, mental-health resources, and donation links.

To build it, Kel turned to Carrd, a simple tool that lets anyone throw together a site in minutes. All it takes is an email address to have a site hosted by Carrd on whatever topic you want. “I don't have much of a platform and was even hesitant to share it at first,” says Kel, who asked not to be identified with her surname to avoid trolls. Carrds give anyone that platform.

Justice for Jacob Blake is just the most recent of the social-justice-related Carrds shared across Twitter, Instagram, and TikTok as one-stop resources in recent months. Such easy-to-use tools are reinventing the  basic building block of the internet—the website—for people who want to share resources and information quickly, safely, and creatively. Along with better-known tools like Google Docs, they are forming the bedrock of a new form of “protest internet” for the 2020s.

Carrd was launched in 2016 by founder AJ (who goes by just his initials) to simplify the process of creating web pages. He says it was never meant to be a protest tool—though he isn’t unhappy about how it has been repurposed. He just wanted a “boring” and simple way to throw up a website quickly. “My expectation was more ‘general use,’” AJ says. “I didn’t anticipate any of these other uses. Those were pleasant surprises.”

Carrds were initially used as personal pages and homepages for small businesses touting things like homemade wares or tutoring. Like many recent trends, they found initial popularity among K-pop fans, who created elaborate digital collages of bands. But Carrds quickly proliferated beyond the K-pop set, initially into niches like Harry Potter fan fic, fantasy, and LGBTQ communities.

Then George Floyd was murdered. AJ remembers the exact moment when Carrd exploded. On May 30, he got an automated notification that his server was about overloaded. It didn’t make sense. “I didn’t realize what was happening,” he says.

Blessed by the queen

Turns out that the queen of virality herself, Kim Kardashian West, had tweeted out a link to a Carrd that listed resources for the Black Lives Matter movement. It was the beginning of a fundamental change in how Carrds were used: they were embedded in Instagram, TikTok, and Twitter bios by users looking to push forward social change.

Carrd is not the only site-making tool to evolve this way. Bio.fm touts itself as a competitor to Carrd, and Linktree has seen similar growth, from 5 million accounts in May to 7 million now, according to cofounder Alex Zaccaria ( AJ says Carrd is at “over a million sites now”). Like Carrd, Linktree lets users create simple sites made up of links, easily embeddable on social media. It also saw a boost in users after George Floyd’s murder—in the last three months, 80,000 users signed up and linked their personal Linktree pages to the official Black Lives Matter movement.

The evolution of these sites illustrates a fundamental change in how Gen Z consumes news and uses social media, says Amelia Gibson, an assistant professor in the School of Information and Library Science at the University of North Carolina, Chapel Hill.

“A lot of traditional news is in a format that young people don’t spend time on, like TV,” Gibson says. “Social-media news is driven to them by their existing networks. It’s about who they know and what they value.”

Heir to the throne

Earlier this year, viral, collaborative Google Docs seemed like the innovative way for protesters to connect. Now Carrds seem to be taking their place. They are so widespread that Carrds of Carrds have popped up—pages that linked to a ton of other Carrds, a sort of search engine. 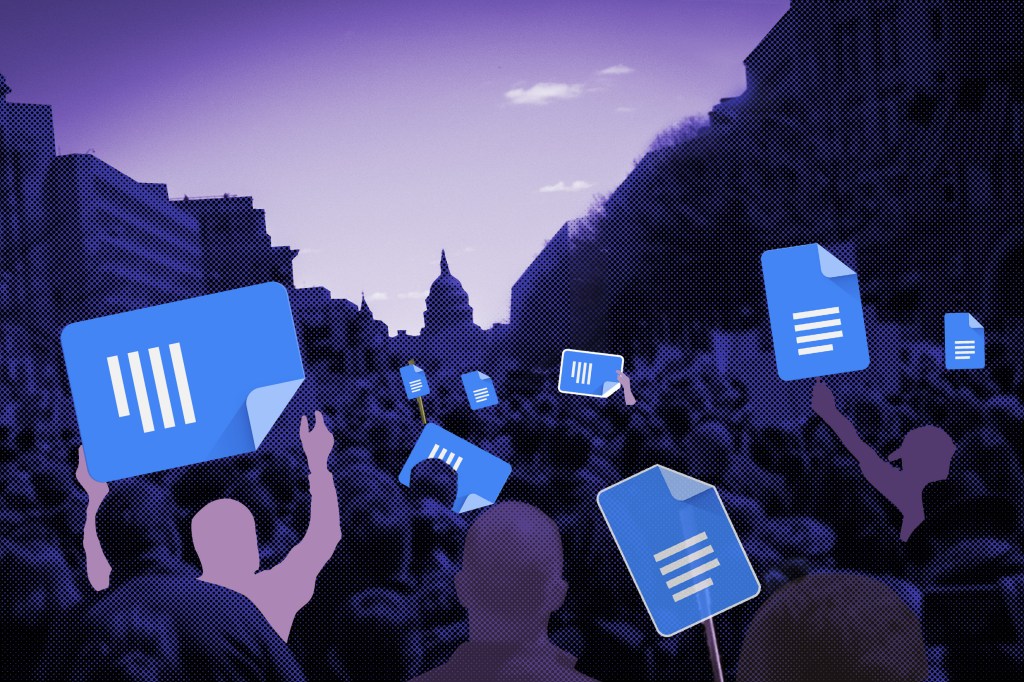 It helps that they are visually more layered and interesting than Google Docs. The strength of Google Docs lies in how simple they are to navigate (if you’ve ever used a word processor, you can manage a Google Doc). But Carrd offers the (restricted) creative potential of web page design. “Carrds are a whole lot easier for the creator—they’re a fairly clean, straightforward, nice-looking product that on any other format, like Wordpress, would take a lot of effort,” says Gibson.

That ease means that creators often have multiple Carrds under their belt, creating a sub-economy of design tips and art. Alex, an 18-year-old in western Australia, has made several Carrds and hosts a YouTube channel offering how-tos. “Almost anyone can set it up,” Alex says. “[I] make them for fun.”

Kel has created multiple Carrds too, starting with stan pages for K-pop and Animal Crossing. She’s helped her friends make Carrds, created LGBTQ resources with Carrds, and even created Carrds to showcase her art for school projects.

Explanatory, PowerPoint-like Carrds are especially popular. Gibson says that what we’re witnessing in Carrds and Linktree alike is the transformation of social media from a personality-focused to an anti-influencer mentality. With the newer tools, the focus remains on a cause itself, not on the celebrities affiliated with it.

In fact, these sites are the ideal medium for drawing attention to causes in a fast-moving news cycle, says Paolo Gerbaudo, the director of the Centre for Digital Culture at King’s College London.

“One-page sites offer a way to escape some of the obsession with instantaneity of social-media conversations and a place where people can build user profiles without using Facebook,” Gerbaudo adds. (Though Carrd now offers the ability to link multiple pages, its bread-and-butter remains the one-pager.)

There’s another reason why Carrds have an advantage over Google Docs as a protest resource: privacy. Only an email address is required to sign up, with no identifying details. Indeed, it was often impossible for me to find Carrd creators through their Carrd itself. When I did get through, emails often came from shadow accounts.

That privacy can smooth the route to education and activism about sensitive topics like gender identity, particularly amidst “cancel culture” in an election year, Gibson says: the “potential offered by anonymity” is important to creators of content about issues like trans or racial identity, who are often vulnerable to trolls.

Carrds are also incredibly easy to share. Links are far more straightforward than the gobbledy-gook of letters and numbers that compose a Google Doc address. The slideshow format is “bite-sized,” as Gibson puts it, making it mobile friendly and well suited to social media.

Ultimately, these platforms are successful in offering concrete ways to act in an era when direct interaction is often nearly impossible because of the pandemic. “As much as people across generations might be dedicated to protests and causes, I think it’s hard to find ways to do the work of social change,” says Gibson. “It’s a better strategy to focus on the issues, and Carrds allow them [activists and creators] to focus on specific issues and organize in ways that are probably safer and point to specific and concrete ways to act.”

AJ is still surprised by his tool’s  evolution. “I’ve been floored,” he says. “I didn’t anticipate it. It feels like a throwback [to the early internet]. You can question the quality of the design, but you can’t question the authenticity of it. It’s nice to enable people to do that.”