The great TikTok teen and K-pop fan plan to embarrass US President Donald Trump at his rally last weekend in Tulsa, Oklahoma, began with a grandmother named Mary Jo Laupp. Two weeks ago the 51-year-old from Iowa made a TikTok video for her 1,000 followers encouraging people to protest against Trump by signing up for his rally online and then not showing up.

The idea wasn’t exactly new. A coalition of online protesters known as the #Resistance—largely older millennial and Gen X Americans who use Twitter to confront the president on his favorite social-media site—had tried similar campaigns in advance of Trump rallies last year, but with little success. Laupp’s message actually worked, however, as TikTok users began responding to her idea with enthusiasm. Then another user asked K-pop stans—that is, highly active and focused fans of Korean pop groups—to help. The message took off, with more than 300,000 people viewing it, and some commenters saying they had registered for dozens of tickets. Critically, the stans didn’t need to develop new skills to do this: they just used the same set of online manipulation techniques they had learned to promote their favorite musicians.

Watching this idea grow in real time, as it attracted media coverage and admiration, meant observing the creation of a myth: that these teens have become politically radicalized, joined the #Resistance, and formed an unstoppable coalition of pranksters eager to embarrass the president.

When they hit Trump where it really hurts—crowd size at rallies is one of his favorite topics to brag about—the #Resistance loved it. And things gathered even more momentum when just 6,200 people showed up to the Tulsa rally, after the campaign claimed that more than 1 million people had registered to attend. Although their true impact on that small turnout is uncertain, Gen Z and K-pop stans were credited with engineering the moment as they and their new fans celebrated online.

These narratives suggest to some that TikTok and K-pop heroes will save America from Trump by being better at the internet than anyone else. It’s a story that began building weeks ago, when stans were praised for spamming law enforcement apps with fan-made videos and hijacking racist hashtags in support of Black Lives Matter protesters. But, as with all myths, it’s more complicated than that.

The heroic narrative means that K-pop stans and TikTok teens are fast becoming to liberals what 4chan is to older Trump supporters: an army of anonymous internet warriors they love to praise but don’t really understand. And while stans may be doing what the #Resistance wants right now, these groups are not monoliths, as Charlie Warzel wrote in the New York Times. The liberals who are desperate for a secret weapon against Trump do not own them, and their loyalty cannot be collectively “won” or “lost.” They also have mixed feelings about following the lead of the older generations that have failed to address problems from school shootings to climate change to systemic racism. Reality is always more nuanced, less clicky, and more morally complicated.

Understanding the role played in this moment by a massive fandom (or, for that matter, an entire generation) requires thinking about stans differently—and understanding that there are multiple truths all in tension with each other.

Yes, many younger people, including K-pop fans and TikTok teens, are using the internet to be heard; and yes, they are also engaged in meaningful activism that deserves attention and respect. But it is simultaneously true that not every K-pop fan is anti-Trump, that even those who are protesting today may not protest tomorrow, and that the same strategies used for non-harmful protest have also been deployed by—and within—these same communities to hurt people, including or especially minorities.

“The tactics being employed—such as crashing hashtags, aggregating donations, or bringing attention to certain links or tweets—all of these actions, for the most part, were employed positively for Black Lives Matter,” says Miranda Ruth Larsen, a PhD candidate at the University of Tokyo who is researching K-pop idols in Japan. “They’re the same tactics used against BIPOC (Black, Indigenous and people of color) fans.”

The emerging myth about these young, Extremely Online saviors requires ignorance in order to work. People who don’t follow K-pop fandom—which, it should be noted, is really more a series of fandoms distinct to each musical group—tend to assume that their American fan base is a horde of white, screaming tweens who are apolitical and hyperfocused on their pop enthusiasms. But K-pop’s US fan base is actually very diverse and progressive, according to Michelle Cho, an assistant professor of East Asian studies at the University of Toronto. They’re not even all, or overwhelmingly, teens.

Black K-pop fans have long used social media to hold their favorite groups and other fans accountable for appropriation and racism within their community, as I wrote recently. That work has made some Black fans into targets for harassment within the fandom by stans who refuse to hear criticism of their favorite stars. And yet Black fans have largely been left out of the conversation as K-pop’s activist potential gets more mainstream attention. It’s only if you ignore these voices that K-pop feels like an apolitical space that just recently woke up.

When people praise “K-pop stans,” they’re really talking about a subset of the fandom that is already highly skilled at being loud and getting heard online. Stans demonstrate their loyalty by manipulating online algorithms and trends to make their favored group as visible as possible. They’ll stream new videos on YouTube to help a band break viewing records. They’ll make hashtags trend, or hijack other topics with fan content. Another reliable way for stans to gain attention and praise for their community and idols has been to donate en masse to a cause.

Larsen, the expert at the University of Tokyo, is a K-pop fan herself—but she’s not a “stan.” Among the many things that worry her about watching a massive and somewhat inaccurate fantasy about K-pop grow is how it will redefine what it means to be a valid participant in fandoms. Online manipulation is “now being held up as the representative of what it means to like K-pop,” she says. That means stan behavior—a somewhat extreme orientation—may soon be seen as the baseline for being an “authentic” K-pop fan. 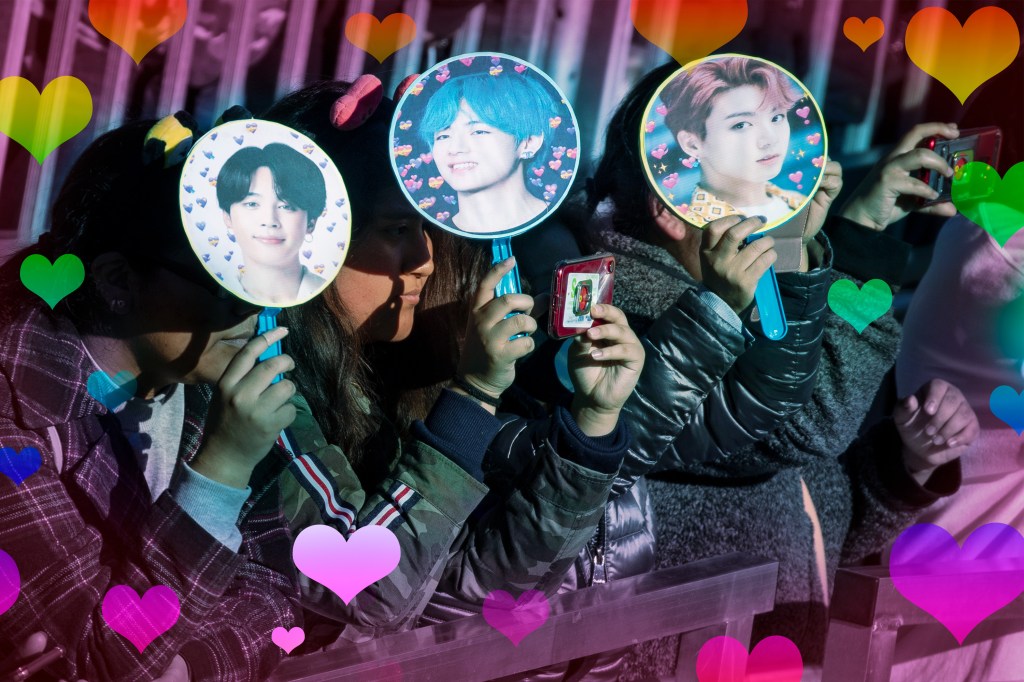 How K-pop fans became celebrated online vigilantes
Korean music’s vast army of online fans have been celebrated for activism during police brutality protests. But the applause has papered over a more nuanced reality.

Gabriella Coleman, an anthropologist and professor at McGill University in Montreal, has long studied online activism and hacker culture. She watched closely over the past several weeks as K-pop fans began to intervene in US social justice issues, and she sees definite parallels to Anonymous, the online hacker collective that originated on 4Chan.

Like Anonymous, the portion of K-pop stan Twitter participating in these campaigns developed political tactics through a series of “microevolutions,” Coleman says. The idea of an entire fandom moving from apolitical to political is wrong. Instead, when they engage in the organizing activities central to their online communities—troll campaigns in the case of Anonymous, manipulating social-media algorithms and trending lists for K-pop fans—“that very process sort of feeds back to them and they realize ‘Wait, we have power.’”

“K-pop fans are quite aware of the ways that they are characterized as a group, as this really rabid group of people that also are kind of sheeple,” says Toronto’s Cho. “That they are just unthinkingly following and tweeting and amplifying things.” When she interviews individual fans, “they’re way more savvy than that stereotype gives them credit for” and “recognize this idea of K-pop as this really powerful force.”

Now that K-pop is a meme, it also has the potential to be weaponized. K-pop stans don’t actually need to show up in force to get credit for an act of online heroics, if the people cheering them on don’t understand what they’re looking at. And viral pipelines to international media coverage have long been a way for those pushing extremist views to seek bigger platforms. Right now, the myth of the K-pop uprising is new, and the story it tells is a positive and comforting one for its liberal fans. But that won’t last forever.

Coleman and Larsen are certain that Trump supporters and the far right are watching this develop too. That could put some of the younger fans who have participated in these campaigns in danger.

“Certain corners of the far right will be innovating in response to this,” Coleman says. “They’re not visible right now, but they will be."

And some of them will be TikTok teens—just not the ones valorized by the liberal myths.