Like a lot of parents, I’m obsessed with taking photos and videos of my kid. So obsessed, in fact, that when my toddler sees me holding up my smartphone she will say, with no prompting, “Cheesy crackers!”

And I’m not just documenting moments in time and then filing them away; I actually go back and look at these things over and over. I get a flashback sensation looking at clips from her first few months, and on trips, I feel closer to home when I watch videos of her chugging milk and dancing to her favorite reggae tunes.

Until recently, I did all this on my phone. But with increasingly capable (and affordable) virtual-reality-geared cameras and all-in-one VR headsets hitting the market, I was curious whether these gadgets could replace—or at least heavily supplement—my smartphone habit with something that felt more lifelike and engaging than a flat 5.5-inch screen.

So recently I spent several days taking 3-D photos and videos with Lenovo’s new Mirage Camera ($300) while hanging out with family and friends, and then poring over the results with the Lenovo Mirage Solo VR headset ($400)—the first wireless, self-contained device that uses Google’s Daydream virtual reality platform.

Despite some major camera limitations and the heaviness of the headset, I enjoyed being able to capture and see loved ones in a new, more immersive way.

The Mirage Camera is a little longer than an Altoids tin, with two 13-megapixel fisheye lenses glued to the front. But instead of taking 360° images as many consumer VR cameras do, this one concentrates on simply capturing 180° images and videos in 3-D. It’s meant to work with the Mirage Solo headset, Google’s smartphone-powered Daydream headset, or Google Cardboard, and you can live-stream videos from it to YouTube, too. Of course, you can also check out anything you shoot on a flat display.

There are very few buttons on the camera itself. There’s intentionally no display, because the camera will essentially shoot whatever’s in front of it. This kind of simplicity was great, and I did end up capturing everything in the 180° plane of view before the camera. 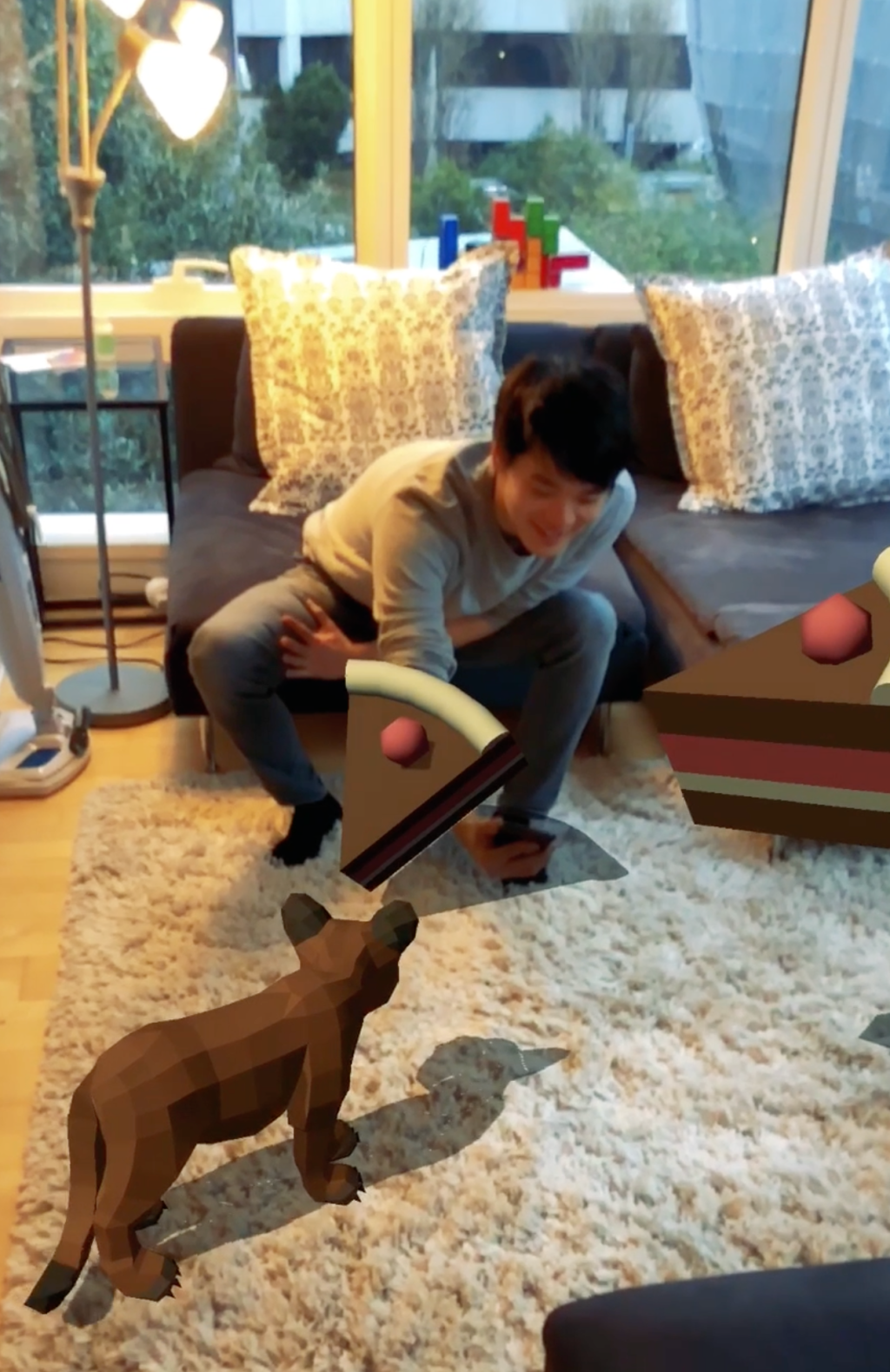 If you want more control over composing images, you can use a Google smartphone app called VR 180 to get a viewfinder and shutter button on your handset, along with the ability to adjust image quality and other camera settings. I didn’t end up using these features much, though, as it would have required a tripod or at least a good spot to leave the camera, and I wanted to take photos and videos when opportunities arose (like my kid clomping around in my shoes). In my experience, good opportunities for such visual cuteness are rarely planned in advance.

Yet while I got my best shots by just keeping the camera at the ready, several design flaws made this tricky at times. The camera has a bit of shutter lag, which can complicate capturing moments that go by in a flash (often the case with little kids, sadly). And the shape and layout of the camera meant my fingers crept into many shots, especially early on, which either ruined them or just made for a creepy effect.

Another problem: in direct sunlight it’s nearly impossible to tell whether the camera is on and what mode it’s in—things that are indicated with a blue glow on the shutter button and various icons on the camera. I tried shielding the gadget with my hand and squinting, but sometimes I just had to go into the shade to make sure it was on.

Getting photos and videos off the camera and into virtual reality turned out to be a chore. Within the VR 180 app, you can see thumbnails of your content, but you must tap on each photo or video and save it to the app (which means downloading it) before you can look at it on the phone or bring it into VR.

The app is meant to work easily with Google Photos and YouTube, but it’s a bit of a process. Because I have my phone set to automatically upload all my photos and videos to Google Photos, everything I saved to the VR 180 app eventually made its way there (in many cases it took a while to upload, especially for the videos). It wasn’t until they were finally in Google Photos that I could check out my handiwork on the Mirage Solo headset.

Looking at the images and videos I took was a blast, though. Seeing my daughter run up to her dad and hug him in my parents’ sunny backyard, with a 3-D effect and from the same vantage point at which I shot the video, felt almost like being there. Ditto for photos and videos of my niece and nephew horsing around, and some stills I got of my parents. Sometimes I wished I could also turn around and see, say, the rest of my parents’ yard, but I was surprised by how transported I felt even with just 180 degrees of imagery.

The image quality could be sharper, and the lighting wasn’t always great. Still, it gave me a sense of presence that I just can’t get with my phone.

It’s still very early days for consumer virtual reality, and many of us won’t be enticed to shell out for a headset—let alone a headset and a camera to make things you can see on it—just yet. But just as the camcorder transformed the way many of us born in the ’80s and ’90s captured family life, this new wave of VR cameras could document iconic memories for children like mine, and do so in a way that seems to take the viewer back in time.

The Mirage Camera and Mirage Solo headset show we’re getting closer to figuring this out. And I’m excited to see what the technology looks like in the years ahead.