When future historians of Silicon Valley look back at 2017, they’ll see a time when America’s most powerful tech companies and the venture capital ecosystem that created them came under unprecedented scrutiny from politicians and the public. The region’s innovation engine produced numerous technical advances, but controversy over fake news and revelations about sexual harassment of female entrepreneurs have cast a shadow over the Valley this year. Here’s a brief recap of some of the most significant developments.

Big tech companies in the San Francisco Bay Area were busier than ever in 2017, and artificial intelligence was a top priority for many of them. Among a long list of AI initiatives, Google launched TensorFlow Lite, a lightweight version of its open-source machine-learning software that has accelerated AI adoption among companies. The new version enables AI to run on mobile phones and household gadgets such as fridges and speakers. Facebook also contributed to the AI software push by releasing ParlAI, a platform that makes it easier for researchers to build conversational AI systems and combine different approaches to machine dialogue (see “Facebook Wants to Merge AI Systems for a Smarter Chatbot”).

There was progress in AI hardware, too. Santa Clara–based semiconductor company Nvidia saw its share price soar over the year as research labs and companies bought large numbers of its GPUs, which have become the chips of choice for many machine-learning applications. Nvidia launched a number of new AI-focused products, as well as demonstrating creative applications of its technology (see “Nvidia Lets You Peer Inside the Black Box of Its Self-Driving AI”). Google also unveiled a new machine-learning chip, the Cloud Tensor Processing Unit, and linked TPUs in the cloud via high-speed data connections to form powerful AI supercomputers.

Self-driving vehicles and augmented reality were two other priorities for the Valley’s tech companies. Alphabet’s Waymo, as well as Uber, Lyft, and Tesla, all made significant transportation-related announcements during the year, including Waymo’s decision to test a fleet of driverless cars in Phoenix and Uber’s decision to spend $1 billion on 24,000 self-driving vehicles from Volvo. (There were a few bumps in the road, too, including a legal battle between Uber and Waymo over allegations of intellectual-property theft that’s likely to stretch into 2018.) In the field of augmented reality, Google and Apple both launched AR software development kits for their smartphones and tablets that should help bring the technology to a mass market.

The Valley’s startup ecosystem also had a busy year. Forecasts in 2016 of an impending meltdown for tech “unicorns,” or private firms valued at $1 billion or more, never became reality. Overall investment by venture capital firms also looks on track to rise again. According to data published in October by the National Venture Capital Association and PitchBook, VC investment in 2017 was on the way to its highest level in a decade. That’s buoyed Silicon Valley startups, though there have been signs that funding for early-stage companies is starting to slow as more money gets poured into deals for unicorns.

That takes care of the good news. Then there’s the fake stuff. The controversy over Russia’s efforts to influence the outcome of the 2016 presidential election by fabricating posts on Facebook, Twitter, YouTube, and other platforms led to intense scrutiny of social-media companies in Congress this year. Mark Zuckerberg, Facebook’s CEO, initially dismissed suggestions that its platform might have been manipulated by Russia to influence voting. When it subsequently emerged that Russian posts had appeared in the news feeds of 126 million people—a far higher number than Facebook’s first estimate of 10 million—the revelation helped spark an unprecedented debate about how to rein in the power of Facebook and other popular networks.

Further disturbing evidence emerged throughout the year that Silicon Valley’s social-media platforms have been failing to police content effectively. In response to a spate of violent videos and hate speech that appeared on its service, Facebook announced in May that it would add another 3,000 employees to the 4,500 who review content that might violate the company’s community standards. In early December YouTube, which had also been criticized for not doing enough to tackle objectionable content, said that Google, its owner, intends to expand the team scrutinizing material that might violate its policies to over 10,000 next year.

Throwing more bodies at this problem won’t solve it. The challenge for Silicon Valley in 2018 and beyond will be to find better technological tools to use. AI will be critical here (see “Can AI Win the War Against Fake News?”) . YouTube says that 98 percent of the videos it removes for promoting violent extremism have been flagged by machine-learning algorithms, and that those algorithms help it take down nearly half of this content within two hours of being uploaded to the site. That’s encouraging, but social-media companies need to come up with even more effective solutions. 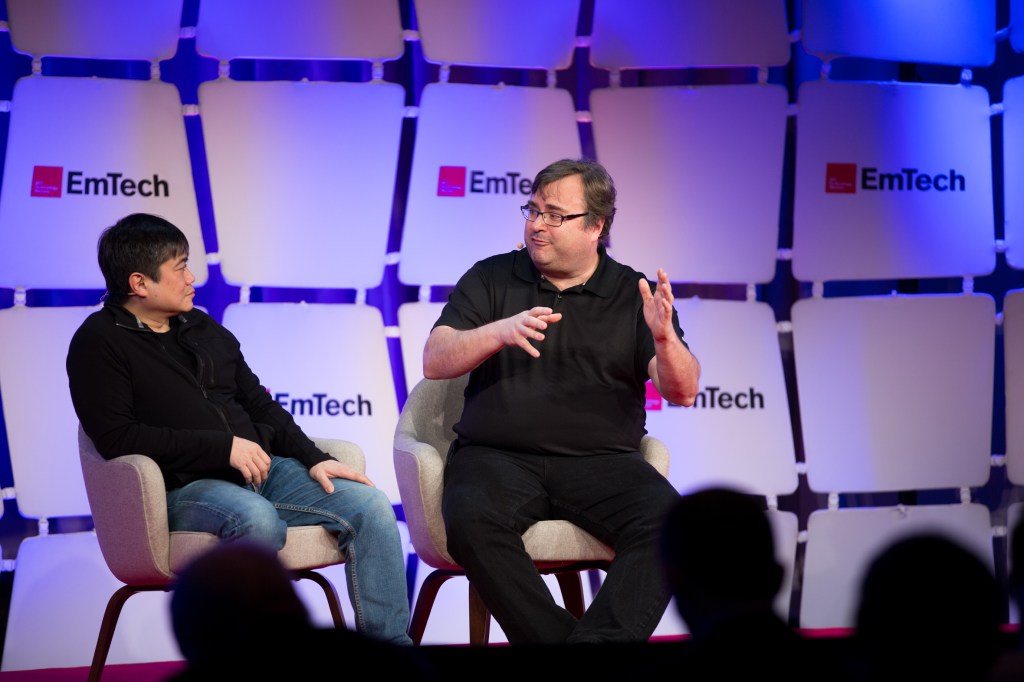 Related Story
The LinkedIn cofounder and venture capitalist explains how he’s trying to combat sexual harassment and economic inequality in the tech industry and beyond.

Another thing that Silicon Valley—and the tech industry more generally—urgently needs to do is address deep-seated discrimination against women. Susan Fowler’s courageous decision in February to publish a post about the toxic culture at Uber triggered an internal review that ultimately led to the ouster of Travis Kalanick as the company’s CEO. Her post also sparked a broader debate about sexism in the technology world. It’s a debate that has become all the more pressing since reports emerged during the year of female entrepreneurs being sexually harassed by some male venture capitalists and other prominent Valley figures.

In an interview with MIT Technology Review in November, Reid Hoffman, the founder of LinkedIn and a highly respected Silicon Valley investor who has championed a decency pledge that stipulates zero tolerance for sexual harassment against entrepreneurs, called on tech leaders to make greater efforts to combat sexism and racism (see “Reid Hoffman: It’s Time to Change Silicon Valley Culture”). As tech companies get bigger, he noted, “you have a responsibility to do well; the standard is higher for you.” Silicon Valley has been great at imposing change on other industries; in 2018 it should try harder to change itself.